Ricky Rochelle - So Far So Good 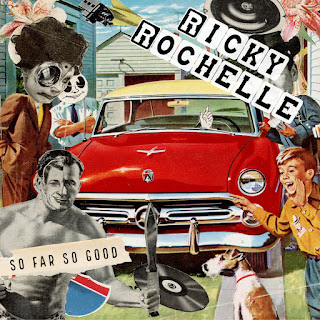 Now this is exactly what I mean when I talk about digging the pop side of pop-punk! Ricky Rochelle is the lead singer and drummer for the Young Rochelles and of course also a member of the New Rochelles. So Far So Good, his first solo album, was premiered one track at a time over a ten-week period late last year. It was officially released yesterday and is now available from all of the major streaming sites. While Ricky's bands are among the very best in today's pop-punk scene, on this solo release he flexes his pop chops even more than usual. And I'm not complaining! These tunes are catchy, cleanly-produced, and unapologetically sweet in their melodic style. I don't know for sure if So Far So Good was fully intended as a concept album, but to my ears these songs tell a love story: beginning in heartbreak, moving into the promise of new love, and culminating in marital bliss. As a veteran of marital bliss, I find this album really hitting a soft spot for me. Happy love songs are so much harder to pull off than bitter love songs, so it's commendable that Ricky Rochelle has succeeded at making an album that features several of the happiest love songs you'll ever hear. Part of that is because he's just so darn likeable, and part of it is because these are just really terrific songs. And while this album doesn't shy from grand romance (particularly on closing track "You Are My Heart"), I appreciate how songs like "Brighter Trails" and "The Best Damn Feeling" hone in on those smaller, more routine moments that truly define what it means to be in love. Those tracks give me goosebumps. Elsewhere, songs about Yetis, jackrabbits, and monkeys add a lighter touch without disturbing the flow of the album (although I swear "Speedy Jackrabbit" actually fits the narrative!).
I enjoy the bitter side of pop-punk as much as anyone, but I've got to hand it to Ricky Rochelle for creating the ultimate feelgood pop-punk record. At a time when there is so much ugliness and despair in the world, Ricky Rochelle has delivered a debut album that gives us all a reason to smile. Physical release coming soon on Eccentric Pop Records!
-L.R.
https://rickyrochelle.bandcamp.com/album/so-far-so-good
https://theyoungrochelles.bandcamp.com/
Posted by Lord Rutledge at 1:08 PM