First Base - Not That Bad 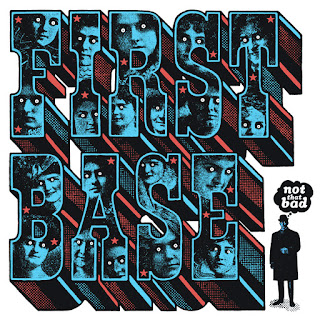 With exactly one month to go until the end of 2017, my album of the year picture just got way more complicated. I sure am not complaining! Not That Bad is the second LP from First Base, out now on Drunken Sailor Records. And that title is the understatement of the year! You'd have to look far and wide to find an album that's more up my alley than this one. It's the perfect union of pop and punk, emphasizing the former without skimping on the latter. This album is about as pop as it gets - but in an entirely kick-ass way. It's as if the past 35 years never existed and First Base took its cues directly from the almighty Ramones. If you ever wished that Teenage Fanclub had taken copious amounts of speed and decided to be a punk band, Not That Bad is definitely the album for you. The hooks just keep on coming and coming, with no song surpassing three minutes. Tracks like "Crybaby", "Eastchester Avenue", and "Dumber By the Day" are super-satisfying blasts of buzzsaw punk with bubblegum melodies. If the Undertones were the Irish Ramones, "Judy" has me thinking that First Base might be the Canadian Undertones! And when the band slows it down and goes for more of a straight power pop sound ("Sandra", "Not That Bad"), the results are spectacular.

Whether you call it poppy punk or punky pop, Not That Bad is the best album of its kind I've encountered in a damn long time. I will be giving it heavy consideration for album of the year. And label of the year is looking like a stone cold lock for Drunken Sailor!