Justine and The Unclean - Get Unclean 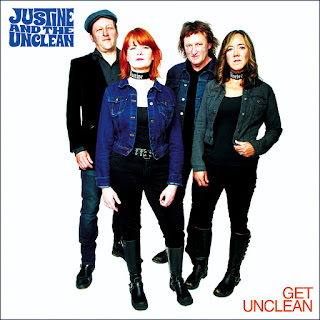 It was still the scorching summer when I first teased the debut album from Justine and the Unclean. Now here we are just three weeks from Christmas, and I am happy to report that the album is out on Rum Bar Records. I must say it's every bit as good as I expected! To review: Justine and the Unclean are comprised of major players in Boston's garage/punk/rock n' roll scene. Justine is Justine Covault (Malachite, Grand Theft Auto, Quest For Tuna) on guitar and lead vocals. The rest of the band is Janet Egan King (Malachite, Heidi, Swank, Tulips) on bass/backing vocals, Charles Hansen (Rock Bottom, Tom Baker & the Snakes, Gymnasium, The Handymen) on lead guitar, and the legendary Jim Janota (Upper Crust, The Bags, Rock Bottom) on drums. The story behind this record is that Covault went on a year-long songwriting binge and entered the studio with over 50 songs - many of them love songs of the particularly painful variety. Just nine of them ended up on the album, which was recorded by Dave Minehan at Woolly Mammoth Sound in Watham, Massachusetts and mastered by the illustrious Danny the K. With all of these principles involved, Get Unclean is a true testament to the immense musical talent that Boston rock currently enjoys.

Get Unclean largely follows the blueprint of the previously-heard tracks "Love Got Me Into This Mess" and "Passive Aggressive Baby" (both included on the album). Imagine your favorite Buzzcocks songs with a harder edge and sassier singer! If you like punky pop songs with big hooks and fantastically bitter lyrics, you should be all over this record. But there are a couple of additional things that this band brings to the table. One is Covault's singing voice, which is really unique and tremendously appealing. On top of that, the band has serious rock chops which Minehan wisely played up in his production. Songs like "Bring Me Fire" and "Worry Stone" kick some serious arena rock ass (Joan Jett fans will dig!). Elsewhere those blazing guitars and thundering drums (I mean, come on, it's Jim freaking Janota!) allow the band to put the power in power pop. "Can't Pretend I Don't Know" is the pop/punk/rock track of your dreams, while "I'm In Love With You, Jackass" incorporates some country twang in a most wonderful way.

All in all, Get Unclean is a terrific debut album from a band I hope we haven't heard the last of. Covault is a fine songwriter with smarts and likability to spare. And boy, does her band ever bring the rock! That Rum Bar winning streak remains very much in tact.