The return of Moral Crux! 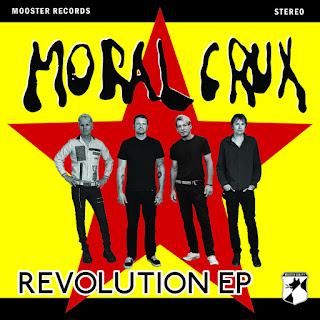 What a thrill it is, in the year 2015, to again be writing about Moral Crux! When I was a young pup coming up in the world of punk rock record reviewing two decades ago, Moral Crux was one of the first bands I championed. Releases like the 7" "Victim Of Hype" and the LP Something More Dangerous were among my favorite records of the '90s. Today I would cite Moral Crux as not just one of my favorite bands of all-time but also one of the biggest influences on me coming to love '77-style punk rock. And after a 12-year break, we finally have new material from this incredible band! The record is called Revolution, and it's coming out on 7" vinyl on the excellent pop-punk label Mooster Records. Moral Crux, I'm happy to report, hasn't changed a bit over the past dozen years. Hell, the band hasn't really changed over the past 32 years! What has worked for decades continues to work now: a classic poppy punk sound a la Ramones/Buzzcocks/Generation X with intelligent political lyrics. With dissent and social protest gaining traction in recent years, now seems like the perfect time to have Moral Crux back on the scene. Lead track "Revolution (Shouldn't Be So Hard)" is vintage Moral Crux. It will have you bobbing your head and humming along, but it also has a great deal to say about the state of the world. James T Farris X remains one of our great social commentators, and a song like "Timeclock" finds him more inclined than ever to rail against the military-industrial complex. The record also contains a newly recorded version of "Heart On Trial" - a Moral Crux classic from its 1993 album ...And Nothing But The Truth. Hearing how well this song holds up after 22 years, I really have to commend this band for the timelessness of its music and its message. And truthfully, I would not be able to say the same thing about a lot of other political bands.

Revolution is now available for download from iTunes, Amazon, etc. You can pre-order the vinyl here. Snag the limited purple vinyl while the getting is good! For more information on Moral Crux, check out the band's ReverbNation page!