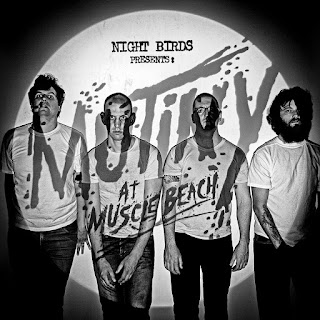 Holy shit, have you heard this new Night Birds record?! Unbelievable, right?! Of course I expected the album to be really freaking good. After months of eagerly awaiting its release, I was anticipating nothing short of complete excellence. But, DAMN! I don't think I was quite prepared for this!

On their brilliant second album Born To Die In Suburbia, Night Birds showed us growth and variety and a fully realized musical identity. It was the perfect sophomore album - forever silencing the notion of Night Birds being overly indebted to their musical influences. But with the bar set so high, I wondered how they'd possibly go about topping themselves. I considered the possibility that they'd make a totally great third album and I'd still be like, "Ahh, it's no Born To Die In Suburbia." But nothing of the sort happened! If you expected Night Birds to lose their edge now that they're on a big label, fear not. They actually went the other direction! Following the creative refinements of Born To Die In Suburbia, the Fat Wreck Chords release Mutiny at Muscle Beach is pure raging adrenaline. It's the sound of four dudes channeling their collective life frustrations into a fast and furious hardcore punk assault. Never before have Night Birds sounded this ferocious, this urgent, this hell bent on obliterating everything in their path. Mutiny At Muscle Beach is the kind of record you turn to when you're pissed off and on edge and fully disgusted by the human race. You're primed to destroy whatever or whoever gets in your way. Nothing but punk rock will alleviate your distress. You lock your door and drop the needle on the vinyl. You crank the volume so loud that the walls shake. You thrust your fist in the air and scream along to every lyric. All that energy flows through you, and you get an indescribable rush. For the next 25 minutes, all is right in your world. And if you assumed that nobody makes those kinds of records anymore, Night Birds are here to set you straight!

No doubt, new drummer Darick Slater has given Night Birds' sound a huge kick in the pants. I suspect the guy may be an alien - or at least part robot. He and Joe Keller let it rip like the second coming of Chuck Biscuits and Randy Rampage. You just won't hear a punk group with hotter chops, and producer Chris Pierce deserves massive kudos for capturing every bit of that scorching intensity in the studio. But the difference in this album is more approach than personnel. From the songwriting down to the musical performances, it's as if the intention of this release was to completely blow our heads off! Half of the tracks don't even clear two minutes, and the longest one comes in under three. On lead vocals, Brian Gorsegner summons anger and desperation from a very real place within himself. In an entirely awesome way, he sounds like he's on the verge of losing his mind. I don't feel like Brian has ever gotten quite enough credit as a singer, and in a lot of ways his vocals are the force propelling this entire album. And I love how the rest of the band is so perfectly in sync with his fired-up mindset. Yet even with the step-up in aggression, Night Birds remain committed to tuneful melodies and catchy as hell choruses. From top to bottom, this is the band's strongest collection of songs to date. Blistering tracks like "(I'm) Wired" and "Lapsed Catholics Need Discipline" will leave you battered and gasping for air, while the slow-burning "Son Of Dad" is a menacing change of pace. Looking for something a little different? "In The Red/In The Black" sounds like Milo Goes To College era Descendents surfing on Adderall. And while everyone likes to place Night Birds' musical time machine somewhere in the vicinity of Orange County 1981, the Kinks cover "King Kong" sounds more like L.A. circa 1978.

If you're craving "vintage" Night Birds ("Golden Age Of TV", "Left In The Middle") or surf instrumentals ("Miskatonic Stomp"), Mutiny At Muscle Beach will not leave you wanting. But by no means is this a case where owning the previous LPs makes the purchase of the new one unnecessary. Night Birds worked extremely hard to create a strong debut for Fat Wreck, and they came through with an absolute stunner. This is one of the best punk groups of its generation at the very top of its game. As a huge fan of the classic albums of Black Flag, DOA, Zero Boys, etc., I would absolutely consider Mutiny At Muscle Beach to be their modern day counterpart. It will get you pumped up for whatever challenges you face in your daily life, and it has a lot to say about the state of society. At a time when the world needs punk music more than ever, it's important to recognize that there are some really great bands out there. I'd put Night Birds at the top of the list.