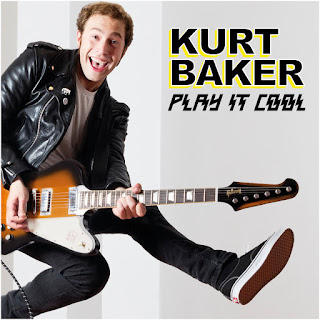 Having had three years to ponder the matter, I can say without hesitation that Kurt Baker's Brand New Beat holds a spot in my top ten list of all-time favorite power pop albums. I would definitely call it a contemporary classic, and following it up had to be a tall order for Baker and his songwriting collaborator Wyatt Funderburk. If Baker and Funderburk had simply turned out a new album that was a carbon copy of Brand New Beat, that would have satisfied the fan base just fine. But there was no way that was going to happen. These guys are two of the best songwriters out there, and clearly they were determined to take their time and come up with something truly special. The result is Play It Cool, an album that infuses Baker's signature power pop/pop-rock style with a live rock n' roll energy. As I mentioned in the press release for this album, these songs capture the feel of seeing Kurt Baker in concert. And what that translates to is fun for everyone! Play It Cool revisits all the things you loved about Brand New Beat but adds so much more - rocking harder and drawing from a wider array of influences. I could be wrong, but I predict that most fans will think Play It Cool is even better than its predecessor!

Play It Cool kicks off with "Sends Me To Mars" - a rock n' roll ripper penned by Portland, Maine garage/punk legend Kip Brown. It was originally recorded in 1986 by Brown's band The Wild Hearts. Not only is this song a wonderful tribute to a prolific and under-appreciated artist, but it's also a perfect tone-setter for an album that's an absolute blast all the way through. Baker and friends launch this rocket right out of the gates, and quickly you get the sense that this is going to be a different kind of record. Close your eyes, and you can easily picture bodies flying all over the stage while Kris Rodgers pounds those keys like his hair's on fire. You'll be tapping your toes within 10 seconds and jumping out of your seat within a minute. And from there, the album only gets better! If you're craving some "classic" Kurt Baker, you won't be disappointed. "Enough's Enough" ought to be a massive radio hit. "I Got You" will put a smile on your face no matter how bad your day is going. "Monday Night" reminds us that it's never the wrong day of the week to have a good time. "Just A Little Bit" sounds like Elvis Costello fronting Thin Lizzy. But ultimately it's the variety of the song selection that makes this the most enjoyable of all of Baker's albums. Running the gamut from '80s pop-rock throwbacks ("Play It Cool") to raucous garage rockers ("Doin' It Right") to pretty Beatle-esque janglers ("Talk Is Talk") to Raspberries-inspired sing-alongs ("I Can't Wait") to wonderfully sappy ballads (the magnificent "Back For Good"), these 12 songs demonstrate how crucial melody and quality hooks can be to almost any style of music. And backed by an all-star supporting cast (Rodgers and Geoff Palmer from The Connection, Adam Cargin from Screeching Weasel/Riverdales), Baker fully delivers on the promise of a high energy, fun-to-the-end musical performance. If you've never witnessed The Kurt Baker Band live, Play It Cool will make you wish you had!

Play It Cool is a rock n' roll album first and a power pop album second. And that, I'd say, is the natural order of things. If you've soured on today's power pop because the power part of the equation is so rarely emphasized, this could be the record that turns you to the dark side. And for those of you who are huge Kurt Baker fans and have been looking forward to this album for a long time, you're going to love what you hear! Seriously: Baker and Funderburk have totally knocked it out of the park with these songs! I'm talking an A++ effort! I suppose only time will tell whether or not Play It Cool surpasses Brand New Beat in my heart. But my gut reaction is that this is the best Kurt Baker album yet! Get the download from Baker's Bandcamp and the CD from Rum Bar Records. Vinyl will be out later this fall on Eccentric Pop Records, Ghost Highway Recordings, and Jolly Ronnie Records!