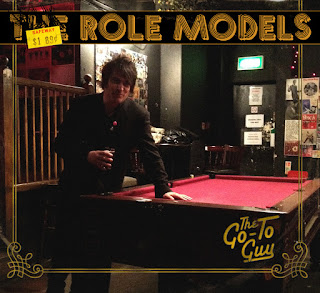 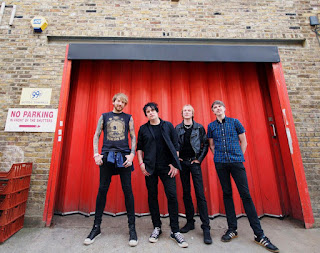 If I had to name my single favorite song of the last couple years, my choice would be "Lost In The City" by Role Models. It's truly one of the best songs I've heard in my entire life. No joke! Needless to say, I was over the moon when Dom from Glunk Records told me he was releasing the long-awaited debut album from Role Models. I was reminded of what it felt like to be a music-obsessed kid and how I'd literally count the days until a band I loved was releasing its next album. There was nothing like finally getting my hands on that record, retreating to my bedroom, and completely immersing myself in great music. That's pretty much how it went a few weeks back when Role Models' The Go-To Guy magically appeared in my inbox. I let out a shriek of sheer delight, canceled all my appointments, locked the doors, put on my headphones, and proceeded to savor every note of the album. Then I listened to it again. And again. The Go-To Guy was everything I hoped it would be. In a year full of fantastic LP releases, it's up there with the best of the best.

Role Models are a London-based band led by singer/songwriter/guitarist Rich Rags (The Loyalties). He's joined by Daniel Husayn (Red Dons) and his Loyalties band mate Simon Maxwell. Another Loyalties member, Rich Jones (Black Halos, Michael Monroe Band), stepped in to play guitar on this release. But don't expect this record to sound like The Loyalties. There are certainly some shared influences (Hanoi Rocks, Johnny Thunders) between both bands. But Role Models are more hook driven - mixing glam-punk with power pop and straight-ahead rock. As a songwriter, Rich Rags is cut from the same cloth as guys like Tom Petty, Paul Westerberg, and a young Peter Case. He's got a keen ear for melody, a natural flair for storytelling, and a real knack for tugging at your heartstrings. And what makes him a personal favorite of mine is his understanding of what a great song can mean in our lives. Don't we all have that memory of a perfect moment from our younger days and the song that was playing at the time? Every time we hear that song, we momentarily become teenagers again. Rich Rags writes songs like that - those transcendent pop anthems that happen to turn up on the radio while you're driving around with your friends on a warm summer night and basking in the unlimited promise of youth. The way he's able to imbue these simple pop songs with just the right mix of melancholy, nostalgia, and wide-eyed optimism is really something special.

Being such a huge fan of "Lost In The City", I did wonder if I was going to judge the songs on The Go-To Guy against it. But once I played the album, I knew that was a non-issue. Now the only question is how Rich Rags is going to top these songs! In a better world, the likes of  "Nowhere" and "The Jerk" would dominate commercial radio and appear on major movie soundtracks. "Cherry Dear" boasts the kind of perfect hook that some songwriters spend their lives trying to write. "Saturday Night Sailor", featuring guest bass work by the legendary Sammi Yaffa, ought to be slotted on a mixed tape between Generation X and Tommy Stinson. And while the prevailing vibe of the album is mid-tempo pop, there are some nice surprises as well. Loyalties fans will go nuts for the Supersuckers meet Dead Boys fury of the title track, while the emotional ballad "Leave Tonight" leaves the kind of lasting impression I always look for in an album closer.

With their earliest recordings dating back to 2011, Role Models were long overdue for a full-length album. But The Go-To Guy was 100 percent worth waiting for. It fully realizes the potential of those previous EPs and firmly establishes Rich Rags as one of the best songwriters on the planet. It's definitely the A+ power pop record I was hoping for, yet it totally rocks as well. The production is plenty ballsy, and you just can't beat the two Riches' dueling guitars. Albums this good are what make me want to write about music. You can order the CD directly from Glunk Records. Visit Role Models' Bandcamp for a preview of The Go-To Guy and a free download of all the band's EPs!

This has become one of my favorite albums of the year. You chose the best two songs for the BC links. The whole album is good, but for me its GREAT from "Nowhere" to the end. I sing along at the top of my lungs when alone in the car.

I need to edit my comment from 9/14. I just noticed that the order of the songs on bandcamp is different than the order they ended up from the download and importing into iTunes. So I don't even know the real, intended song order.
So I'll just say this - Nowhere and Cherry Dear are me favorite songs.

PS: did you hear the original version of "Cherry Dear" from the first EP? I like it, but you can tell that Rich has really perfected that song over the years and turned it into something special.

No, I didn't go any further back than Lost in the City. He has learned to sing in key since then and it makes all the difference.