Return of The Sick Livers! 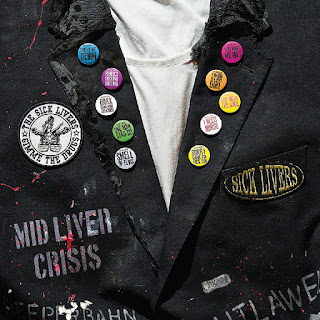 If you long for the late '90s heyday of the Backyard Babies and Turbonegro, The Sick Livers need to be your new favorite band. Perhaps they already are! Like the aforementioned godheads of Scandinavian sleaze, The Sick Livers seem hell-bent on making the greatest rock n' roll record in history every time they go into the studio. The band's debut LP Motors, Women, Drugs, Booze & Killing is one of the few modern-day glam/punk/hard rock albums that can rightfully be mentioned in the same breath as genre standards like Total 13 or Apocalypse Dudes. And now the bad boys of South Wales have returned with a sophomore effort that ought to be the salvation of rock n' roll. It's called Mid Liver Crisis, and it arrives with considerable expectations. But Ginge and co. had the right idea: the only real way to follow up a perfect rock record is to go out and make an even better one!

Combining the growl and the grit of classic glam/punk (Stooges, Hanoi Rocks, Dead Boys) with the power riffs of the best '70s hard rock (AC/DC, Motorhead), Mid Liver Crisis is pure good times from open to close. Every song's a hit! You're likely to pump your fist so many times that you blow out your shoulder. And you'll probably go hoarse from all of that singing along! This is what the world needs more than ever: a band that can rock your face off and write great tunes with memorable choruses. Songs like "This Is My Denim", "Smell Of Elvis", and "You Make Me Wet" would surely alleviate half of all human suffering if they could somehow infiltrate the pop charts. They're just fun! And Ginge Knievil is a bona fide throwback to the great rock frontmen of yore - tearing into these tunes with swagger, charisma, and a powerhouse voice that's equal parts Bon Scott and Noddy Holder. In this unfortunate age of political correctness running rampant, The Sick Livers are that rare band that's still unafraid to offend. When's the last time a rock n' roll record made you laugh? This one will do just that - over and over again. I get the feeling that a great number of people will soon be adopting "Sorry, Thank You, Fuck You" as their own personal anthem.

Known for their chaotic and highly entertaining live shows, The Sick Livers have had no problem capturing that same energy in the studio. And their supply of killer material is seemingly inexhaustible. Mid Liver Crisis - with its thundering guitars, gigantic hooks, and non-stop fun attitude - will compel you to crank the volume until your windows shatter. Your neighbors will complain, but that's only because they envy your fine taste in music. Soon they'll be dancing with you in your basement and screaming wildly about wanting to be a Jäger girl. What could be better in life? Get Mid Liver Crisis from Glunk Records in the U.K or Baldy Longhair in the U.S.A.!