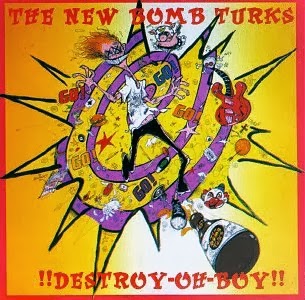 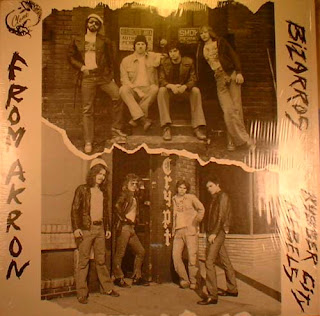 There is something in the air that makes Ohio a breeding ground for excellent punk music. I have, for a long time, wanted to make this list. But actually doing it was harder than expected. Issue #1 was obeying Shawn Abnoxious (supreme authority on all things Ohio punk) and disqualifying the Dead Boys on the grounds that by the time they put out an album, they had long left (or in Shawn's words, "turned their backs on") the great state of Ohio. Issue #2 is deciding what does and does not count as "punk rock". Ohio has an incredible legacy of world-altering underground music, but a lot of its more storied bands (Devo, Electric Eels, Pere Ubu) were probably more new wave or avant garde than punk rock per se. Issue #3 is that many of the legendary Ohio punk groups either never released a proper LP (e.g. Kneecappers, Customs) or are better known for their singles (e.g. The Pagans). All of that said, I still think this is an impressive list covering a very lengthy period of time. In fact, I can think of very few states that could beat this top ten. As I like to say, Ohio always wins.

Without any further ado....

10. Chemo Kids (Cincinnati)- Radiation Generation (2000)
"Recorded by Andy Slob in his basement on December 7th, 1941 in Pearl Harbor, Hawaii." Ha! A classic "Ohio punk" sound all the way from these Queen City degenerates. The world awaits a free stream of all Chemo Kids recordings.

9. Beatnik Termites (Cleveland) - Taste The Sand (1995)
One of the top five greatest pop-punk albums of the '90s and a huge influence on the "oldiescore" strand of the genre."9:15" is a stone cold classic song.

8. Toxic Reasons (Dayton) - Independence (1982)
Invoking the Shawn Abnoxious rule, this is the only Toxic Reasons album I can count for this list. If not their very best album, it's nonetheless one of the definitive titles of early '80s political hardcore.

7. Prisonshake (Cleveland)- The Roaring Third (1993)
As I stated in a recent post, I probably consider 1993 to be the greatest year for punk music in the last quarter century. This rip-roaring Andy Shernoff produced gem deserves to be part of the conversation.

6. Rubber City Rebels/The Bizarros (Akron) - From Akron (1977)
Again, this is a case where a band (Rubber City Rebels) probably released its best music after it left Ohio. But there was no way I was going to do this list without including the Rubber City Rebels - the Dictators of the Midwest. "Brain Job" and "Child Eaters" are punk anthems for the ages.

5. Gaunt (Columbus)- Yeah Me Too (1995)
Criminally underrated, Gaunt was one of the best punk bands going in the middle to late '90s, infusing melody and hooks into the fast and filthy punk sound that defined the Columbus scene. I singled out this title, but any Gaunt album is worth picking up. R.I.P. Jerry Wick.

4. Screaming Urge (Columbus)- self titled (1980)
A.k.a. "the blue album", this was one of the great overlooked American punk albums of the early '80s. Hitler's in Brazil!

3. Pagans (Cleveland) - self titled (1983)
The Pagans, Ohio's greatest punk band, split in 1979. But Mike Hudson reassembled the band in 1982 with guitarist Mike "Tommy Gunn" Metoff and three all new members. If not quite on par with the band's classic singles, the self-titled "pink album" is still raging and essential. "Nowhere To Run" will blow your face off!

2. The Slobs (Cincinnati)- Down The Tubes (1996)
I remember reviewing this album back in the early days of my "career", and all these years later it holds up even better than anyone would have expected. A true masterpiece of snotty, scummy, in-your-face punk. One of the best and most underrated LPs of that glorious '95-2000 era of punk rock.

1. New Bomb Turks (Columbus) - !!Destroy-Oh-Boy!! (1993)
What I love about the New Bomb Turks is that they were proud of their Ohioan punk legacy and clearly cited the Pagans and Dead Boys as influences. !!Destroy-Oh-Boy!! starts with that little spark and proceeds to start a fire that burns down everything in sight. This is American-style '77 punk played at wreckless warp speed, and its importance in the garage-punk/punk rock n' roll pantheon cannot be overestimated. Even if the Dead Boys had been eligible for this list, I would have kept !!Destroy-Oh-Boy!! at #1.

Okay, now it's your turn. Tell me who I forgot!

Little Fish in the Big Sea by Musical Suicide

GC5 is should of been known coast to coast.