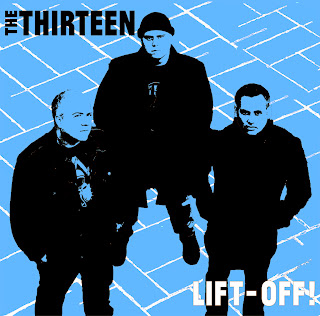 The Thirteen had me at "loud, raucous rock 'n' roll with plenty of melody and hooks". Their music more than lives up to the description, but shows pleasantly surprising diversity. Formed in 2007 as a vehicle for scene veteran Sal Cannestra's songwriting aspirations, the Philadelphia outfit went through a few lineup changes before solidifying into a power trio two years ago when Jack Kontes became permanent drummer. One of my favorite guys in rock n' roll, Peter Santa Maria (Jukebox Zeros), has been a fixture on bass since 2008. New album Lift-Off! is the band's second release, and first with the current lineup. Cannestra (guitar/vocals) is still the primary songwriter, but Santa Maria contributes a couple songs as well and sings lead on those tracks. And while this band does highlight Cannestra's formidable songwriting talents, The Thirteen is a rock n' roll band first and foremost. Lift-Off has the feel of a live band rocking out on stage - with big, crunchy guitars and a tight, hard-hitting rhythm section. The material is a strong mix of high energy powerpop/punk/rock n' roll ("Sweetie Honey", "Outta My Mind"), classic alt rock ("See You Around", "Semantics"), epic song stories ("Bobby and Rose"), and genuinely good power ballads ("Me, You, and Him", "Moped Ride"). The more straight-ahead Stones/Thunders/Replacements inspired tracks were my favorites upon first contact, but over several listens I really became drawn to some of the songs one might refer to as "growers". "Me, You, and Him" is a heartbreaking exploration of the repercussions of marital infidelity, while "Bobby and Rose" skillfully blends Cannestra's post-hardcore roots with the sensibilities of a more traditional singer/songwriter. I can't quite put my finger on who "Steal This Song" is stolen from, but it's great fun! And Santa Maria's "See You Around" could pass for a missing track off of Flip Your Whig. I love that there's real intelligence and substance to this record, yet at no point does the band take itself too seriously or neglect to rock. Self-recorded on an 8-track and then mixed and mastered by Stephen Egerton, Lift-Off! sounds amazing and really ought to be heard on vinyl. I can also vouch for the band's excellent debut album, but I think Lift-Off! really benefits from the musical chemistry these three have cultivated. This is a true band - not just a songwriter and a couple of supporting players. I am notoriously a sucker for hooky rock n' roll, and The Thirteen excels at the style without sounding like any other band out there. Lift-Off! is the kind of album that will make you wish your turntable had a repeat button!