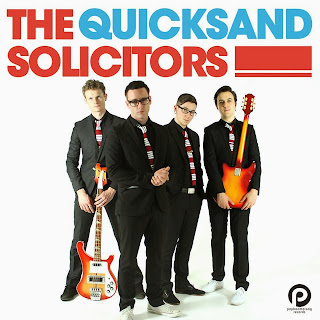 The Solicitors are at it again! Just a few short months after delivering a remarkable debut EP, the Aussie power pop foursome has topped itself with the impossibly catchy single "Quicksand". Just when you thought there was no way the band could make a better song than "Pretty Penny", "Quicksand" comes along and totally raises the bar! In some alternate universe where perfect pop songs still get played on the radio, this would be a #1 smash hit (man, if only I had my own SiriusXM channel...). This is actually part one of what the band intends to be a "double A-side" digital single. The track will be officially launched tomorrow at The Grace Darling in Collingwood, Melbourne. Part two, "Help Me Forget", will release in December.

To celebrate the release of "Quicksand", the band has made a music video that you can view below. The clip brings to mind the early days of MTV, which may be part of why I get a Squeeze/Split Enz new wave pop feel from it. Brilliant songwriter Lee Jones continues to impress me with his ability to blend sweet melodies and upbeat pop sounds with bitter lyrics that pull no punches. Those cleverly scathing lyrics are a big factor in separating this band from the pack. You might feel a little guilty singing along to that irresistible hook, or maybe you'll fully relate and assume that the tongue lashing was totally warranted! This track probably makes Elvis Costello jealous!

As geeked up as I am about a potential Solicitors album, I really like what they're doing here releasing just one individual song at a time. This sort of music has always been about the magic of the three minute pop song. And "Quicksand" epitomizes that very thing. For a limited time, you can get it as a bonus track when you download the band's stellar EP Made To Measure off of Pop Boomerang's Bandcamp page. With this song arriving at the same time as The #1s' "Sharon Shouldn't", power pop fans have got to be in a state of bliss right now. I'm stuck on "Quicksand", and I love it!