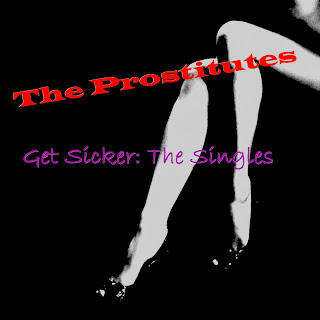 In my book, The Prostitutes were the greatest punk band of the '90s. At a time when the cool kids were starting to crash the punk rock party, this band represented for the weirdos and outcasts. They were like sons of the Pagans, nephews of the Jabbers, and derelict cousins to The Stitches and Humpers. Hailing from the suburban white trash ruins of central Pennsylvania, these five young miscreants found musical inspiration in boredom, chemical abuse, and a mutual hatred for the phony, social climbing scum that inhabited much of the mid-state. The band's first incarnation crashed and burned in the typical punk rock manner, leaving behind one classic LP and three near-legendary singles - all released between 1996 and '97. Singer Kevin McGovern - the demented mind behind the The Prostitutes' genius black humor - regrouped the band numerous times over the years with a revolving door of supporting players. But that vintage lineup (Kevin, Jeff, Justin, Dave, Brian) will always have a special place in my heart. I saw the band a few times, and those dudes were as unwholesome and effortlessly cool as it got. And 16-17 years later, their recordings sound every bit as electrifying and sublimely obnoxious as they did when I first heard them. During some of the shittiest years of my life, that music was a true salvation. Out of print for over a decade, this early material finally returns in the form of a singles collection that Kevin has compiled and made available for a free download.

Get Sicker collects the Prostitutes' "Get Me Sick" and ''Living Wreck" singles in their entirety along with 3 of the 4 tracks from the "Twenty-Two" EP, two songs from the first Pelado Records compilation, and a few choice cuts from the band's LP. Rather than just throwing everything the band ever did onto the collection, Kevin focused on limiting it to just the "good shit". At a lean and mean 14 tracks, this best-of package efficiently summarizes everything that was great about The Prostitutes. It's got all the aforementioned A-sides, plus all-time favorites like "Suicide Is Fun", "1-2-3 GO", and "Modern White Trash". All these songs were recorded quickly and cheaply over three sessions with Al Cox at Studio 213 in Harrisburg. There was little if any overdubbing involved, and no song crosses the two minute barrier. I'd put these 14 tracks up against the best tunes from any punk band of the Prostitutes' day. Sometimes now I'll hear music I thought was great in the '90s and be like, "What the hell was I thinking?" But this stuff really holds up. "Twenty-Two" still makes the hair on the back of my neck stand up, and "Suicide Is Fun" still makes me laugh out loud. Kevin McGovern was absolutely one of the greatest punk rock shouters of his era or any other, adding genuine rage and a touch of crazy to the classic "snotty" singing style. While a lot of the sleazy degenerate punk rock n' roll bands of the time had the "sound" and the attitude, few could write songs as catchy and memorable as The Prostitutes' best tunes. And whether you're talking morbid satire ("And then when she slashed her wrists on Wednesday night/Yeah, that's when I knew that she was out of sight") or brilliant non sequiturs ("I hear that teenage girls/They like to be left alone/I hear Communists/Like to sit by the phone"), the band's lyrical genius has thankfully been preserved for future generations of misfits and malcontents.

What a thrill it is to hear all these songs again - blasting from my computer like they once did from my turntable! And how awesome is it that this album is free?! Kevin, it seems, is finally wrapping up The Prostitutes for good. But the music lives on. Get Sicker makes a perfect companion piece for the more recent album Kill Them Before They Eat - which is also available as a name your price download. Punk rock continues to be relevant because the things that it rails against aren't ever going away. And The Prostitutes railed with the best of 'em. Crank up the volume, give someone the finger, and enjoy this fine compilation!

http://theprostitutes1.bandcamp.com/album/get-sicker-the-singles
Posted by Lord Rutledge at 8:28 AM

The only bad thing about The Prostitutes albums on bandcamp is that they are not in high quality (wav quality), they are mp3 quality (on bandcamp you should buy lossless quality music). Maybe they fix it in the future.