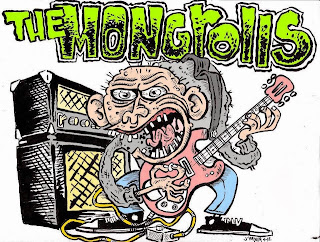 For a brief and harrowing period earlier this year, The Mongrolls were no more. How a one-man band can actually break up is a mystery to me (sounds like the plot to a gruesome sci-fi/horror flick). But it really happened. I tried to take responsibility for any role that I may have played in this highly distressing development. I asked myself if I had played my Mongrolls CDs loud enough. I wondered if my Mongrolls reviews had lacked adequate vocabulary or sufficient syntax. I took myself to task for not buying the complete set of Mongrolls action figures. Had I cut too many Boston Bruins from my fantasy hockey team? Consumed by guilt and dashed dreams, I went into a prolonged existential funk that was only relieved by the sudden and unexpected news that The Mongrolls were back from the dead. Hark! There is joy in Rutland! The Mongrolls are back with the long-awaited Get Dumb - their fourth and by far best album!

While I'd recommend all of the Mongrolls' albums, Get Dumb finally nails what Greg's been going for all these years: lo-fi trash meets powerpop/punk with a touch of Killed By Death. I'd say this is the strongest and hookiest collection of songs Greg has written to date. There are no filler tracks. And from a production & fidelity standpoint, Greg could write the manual on how a "garage" punk recording should sound. For sure, it takes real smarts to make music this stupid. I love the blown-out guitar sound, shouted caveman vocals, and crude, borderline incompetent drumming. The title track is up there with all the classic Mongrolls songs, and "Don't Wanna Know" could pass for some long-lost artifact unearthed from the Rip Off Records treasure chest. "Jerkinittou" is not a cover, but it still suggests a top shelf garage rock novelty hit of yore (Jerkin' it to you? Wasn't that a big dance craze back in the '60s?). And the songs that are covers are great fun as always. The Ronettes' 1963 top ten smash "Be My Baby" and the Amatones' new wave pop obscurity "Plastic Surgeon" both get completely Mongroll-fied, while a smashing rendition of the Roky Erickson/Bleib Alien rager "Two Headed Dog" does not disappoint. But while everyone always looks forward to the covers on a Mongrolls record, Get Dumb is equally rich in quality originals like "Retained It" (Iggy and the Stooges meet The Three Stooges?) and the teethkicking closer "All For You".

There's plenty of stuff out there trying to pass itself off as garage-punk that has nothing to do with garage or punk. But Get Dumb is the real deal - and a sweet deal at that for only $5! I'd like to think of "Get Dumb" as not just the title of an album or song, but as the inspiration for a major movement in American culture. Time to get on board!