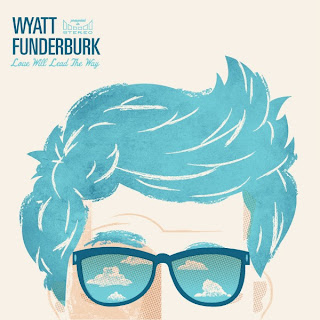 F & L readers may be familiar with Wyatt Funderburk because he produced Kurt Baker's fantastic LP Brand New Beat. But while he is a great music producer, he's so much more than that. His talents as a songwriter and singer make him a true triple threat, and he has finally graced us with some solo recordings. Out now are a brand new LP and single. I'll tackle the album later, but today I'll weigh in on the single.

In the spirit of the late '80s collaborations between Jeff Lynne and Tom Petty, "Love Will Lead The Way" is a perfect slice of melody-driven pop/rock. And while the vibe of this track may take you back 25 years or so, it does demonstrate the timelessness of such things as quality songwriting and sparkling production. Wyatt's got a really nice voice, which is perfectly suited to this kind of song. "Love Will Lead the Way" may be a simple pop tune, but it's beautifully constructed and speaks to a subject of eternal importance to our existence. Listen once, and that melody will be in your head all day.

B-side cut "The Reason" was penned by Geoff Palmer of The Connection, and it's exclusive to this release. No pun intended, it's the reason to buy the single. It's a straight ahead pop song that sort of brings to mind that Fastball/Wallflowers slice of '90s alt-rock. It's just so pleasant and blissfully tuneful, with lyrics that really make you think. And those harmonies are to die for! You just don't hear music like this on the radio anymore, and that's a damn shame. Call it what you want: mainstream, M.O.R., "dad rock". Any way you shake it, it's freaking great. Trends come and go, but melody and craftsmanship are eternal.

There's a line in Wyatt's bio that says, "Whether he is singing, playing, or producing, Funderburk's knack for crafting catchy hooks and classic pop sounds shines through on everything he touches." I think that pretty much says it all. He's incredibly talented, but just as importantly he understands the craft of the perfect pop song. He exists on a plane where the three minute radio hit still thrives. I'm not opposed to innovation or uncompromising artistry in music. But at the end of the day, what I ultimately crave are lyrics that I can relate to and a melody I can whistle while I'm standing in line at the post office. This single has been brightening a lot of days for me lately - and isn't that the ultimate compliment one can extend to a piece of music? If you don't like Wyatt Funderburk, you don't like pop.