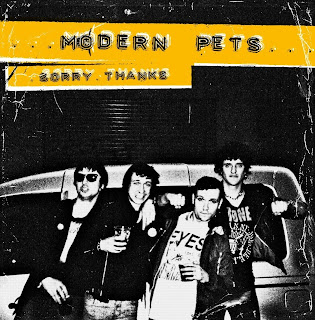 Inexplicably, I have not written about the Modern Pets since before their first album was released. And now they've got a second album out! Where did the time go? This was actually one of the first bands I ever reviewed for F & L, way back in August of 2011. I recently looked over that post, and not much has changed since. "The Modern Pets combine the best elements of early Briefs and later Stitches"? Yep, that's still the basic blueprint. But by now, the Modern Pets have reached the point where they only sound like themselves. Whatever greatness I predicted has been fully realized. New album Sorry. Thanks. takes the band's hyperactive new wavey punk sound and makes it even better. Somehow these German miscreants have managed to make a record that's both catchier and more raging than the last one. Songs like "Pilsator" and "The Walking Contradiction" continue the group's penchant for updating classic '77 snot-punk for these modern, manic times. And while these guys have always played fast, tracks such as "I'm Not a Brick" take things to a whole new level of light speed. I like that the band has continued to do what it does best without turning out a redundant or phoned-in sophomore effort. It's an electrifying, fun ride - with seven of ten tracks failing to cross the two-and-a-half minute barrier. You can hear them integrating more pop melodies into the songwriting, and that lead guitar work is literally out of this world. Having seen the references to the Adverts, Buzzcocks, and Generation X in Dead Beat's product description, of course I was highly enthused to hear the record. And by no means was I disappointed! I have not yet seen a lot of rave reviews of Sorry. Thanks., and that really baffles me. This album is hot!

Josh, Indeed this band is hot. Im working in some words about this in an installnent of EAR PLUGS for Thwart... Which includes a bit of a spotlight for Dead Beat Records cause I got four LPs from Dead Beat (Curtains, Fist City, Modetn Pets and La Face) and each were great...

Saw these guys on Friday with The Love Triangle (another absolutely fantastic power-pop band) and they killed. Picked up the new album and it's great.