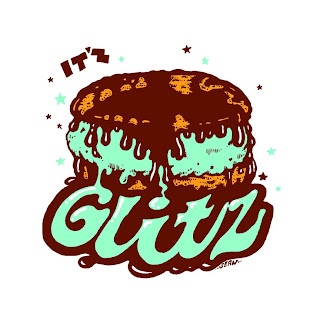 It's been a crazy good year for albums, and there were a few gems I missed when they first came out. So over the next couple weeks, I might play a little catch-up. I'll start with the debut LP from Glitz - a sure shot to make a lot of people's year-end top tens. There are a number of bands at the moment riding the line between glam and power pop, and Glitz is perhaps the best of the lot. And while I get the comparisons to the likes of Warm Soda and Gentleman Jesse, I'd say they have even more in common with, say, Giuda or the Crazy Squeeze. These guys are like the long lost sons of Donny Denim!

Featuring members of such bands as Apache, The Cuts, Personal & The Pizzas, Wild Thing, Hunx and his Punx, Lenz, and Impediments, San Fran supergroup Glitz plays a style of music it likes to call "street glam". It's a sound that combines the muscular riffs and red-hot leads of pub rock with bubblegum melodies and vintage glam-rock stylings. Think Sweet meets '70s Stones meets Milk 'N' Cookies. Or better yet, imagine putting the band's cited influences (Flamin' Groovies, Real Kids, 1910 Fruitgum Company) into a blender and mixing up a hearty and truly delicious concoction. Bands in this vein sometimes come up short - they're often too much pop and not enough rock (or vice versa). But Glitz totally hits all the right spots. These dudes freakin' rock, and the eternal teenager in me cannot get enough of that ripping lead guitar work. Yet the pop lover in me is just as impressed with the hooks. I'd say "the hit" is "Unconditionally", which sounds like Nick Gilder on steroids. But on any given day, I might say that "Sugar" or "(She) Don't Listen To Music" is even better! And just when you think the album is in danger of getting a little formulaic, killer tracks like "Punktual Punk" and "Halfway House" turn up the heat down the stretch with some full throttle '70s style punk rock n' roll action. With three songwriters contributing material, It'z Glitz is refreshingly devoid of filler. And unlike a lot of groups in the glam/pop scene that come off like total pretenders, Glitz is an honest to goodness bona fide ROCK AND ROLL band. If I'd heard this album ten or 15 years ago, I would have run out into the street and started screaming for joy. But while this type of music is far more common in today's underground than it used to be, that's no reason to take Glitz for granted. In a year loaded with incredible LPs, this is one of the very best!