Fun with Gaggers and Stitches! 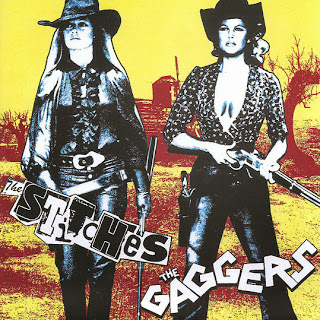 Woo! So after 16 years, Jim at Rapid Pulse Records finally gets the one band he's always wanted to have on his label. No doubt he's released stuff from bands similar to The Stitches, but there's nothing like the genuine article. Mission accomplished! Jim can now retire to a luxurious life on a 500-foot yacht. He will welcome visitors every other Tuesday.

Rapid Pulse and No Front Teeth have proudly collaborated to release perhaps the snottiest split 7" in the history of time. Featuring exclusive tracks from the Stitches and Gaggers, it simply can't miss. And it doesn't! On one side, you have the long-ruling degenerate legends from southern California. On the other, you have the unruly up-and-comers from London who are poised to inherit the throne. And the winner here is....you, the record buyer!

With its snotty, demented vocals and flamethrower guitar leads, "Without You" sounds like classic mid-to-late '90s Stitches. Oddly enough, it's a leftover from the 12 Imaginary Inches sessions. If it didn't quite fit in with the Stitches' early 2000s art-damaged direction, it's still up there with the better stuff from the band's storied heyday. And since the pure '77 snot-punk sound is more my thing anyway, I'm a happy camper. Hard to believe this full-on rager is just seeing the light of day in 2013. Lohrman sings like he has totally lost his mind! If you're like me and cherish your vinyl copy of 8 x 12 like it's a precious jewel, "Without You" will be your favorite Stitches song in years.

While I led this piece with the Stitches, I could just as easily have declared The Gaggers the main attraction. "Gag On This" just might be the band's signature song - a frenzied blast of snot and scum that will leave you feeling violated (and thoroughly delighted!). It's seriously got one of the best vocals I've ever heard on a punk rock song, and again The Gaggers sound like they just stepped out of a time machine from 1977. Take whatever you imagine to be snotty punk rock and double the snottiness. Hell, just go ahead and triple it. That's what The Gaggers sound like. I hear an obvious Stitches influence along with a big dose of the Jabbers, and the guitars remind me of early Buzzcocks. Those who lament the loss of good old fashioned "fuck you" sentiment in contemporary punk music will have their hearts warmed by the Gaggers' unrelenting depravity and hate. This track is everything punk music should be - raw and wild and sure to offend the delicate sensibilities of everyone you truly despise. It's the best pure punk song I've heard since The Inversions' "Hung By the Phone" ten years ago (which, by the way, was also released on Rapid Pulse!).

So here's the deal, folks. This is the single of the year by far and a true instant classic of punk rock. It's one of the greatest bands of today versus one of the greatest of all-time. I think anyone would have been happy with just any two songs from these bands, so it's especially cool that they both came through with A-grade material. So quit your bitching about the punk rock of today being sub-par and cough up six bucks! Operators are standing by!

Get Band email for free at ReverbNation.com