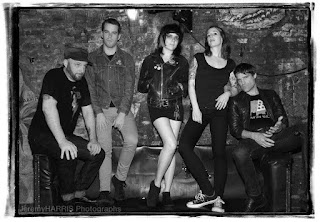 So perhaps you heard that Mr. Eric Davidson has a new band going with the likes of Jami Wolf (Shop Fronts/Zodiac Killers), Daniel Kelley (Dead Ringers/Complaints/Paper Bags), and Greg Collins (Radio 4). If you think that sounds kinda awesome, you’d be absolutely right! I mean, come on! The greatness of Livids was inevitable. This Brooklyn punk rock supergroup, well-known to tear shit up live, recently went into the studio and banged out an LP. They’ve given us a little preview on their Bandcamp page, and all I can say is wow. Holy shit, man! Obviously if you’re a New Bomb Turks fan, you’ll dig. But as a ‘70s punk fanatic, I think I may end up liking Livids even better than the Turks. We’ll see. Davidson, a living legend if there ever was one, has never sounded better. And his star-studded band more than lives up to expectations. You could easily pass Livids off as forgotten punk greats from punk’s class of 1977 - and not just because they cover “Savage Eyes” by Rollerball. If N.B.T. had been a little less “garage” and even more Pagans/Dead Boys influenced, I’m pretty sure it would have sounded like “Ms. Bluff”. Listen and love!

This is really good. Oddly enough, I just recently discovered the New Bomb Turks. Not sure how/why I missed them-- though it probably had something to do with being broke in the 90s. Looking forward to that Livids lp.