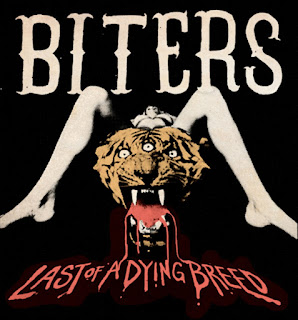 Best news ever: Biters are back! Atlanta's glam/pop/rock n' roll sensations have returned with their first release in well over a year, and of course it's freaking great. Did you expect anything less?! What I love about any Biters record is that it's guaranteed to be filler-free. This group works under the philosophy that only their A-grade material gets released. It's the reason why they do EPs instead of albums. Biters never compromise quality for the sake of quantity, and that's a big part of what makes them such a tremendous band. Oh, and that seemingly endless supply of incredible songs doesn't hurt either!

While far from the only group to have blended high energy power pop with elements of glam and "classic" rock, Biters are probably the best band going in that category. Hell, they might be the best band going in any category! Last of a Dying Breed, out now on Pipeline Records, continues the grand tradition of power-packed Biters EPs. However, it's far from a mere rehash of previous records. The "hit", "So Many Nights", is vintage Biters and possibly the greatest Thin Lizzy rip ever committed to vinyl. But there are also tracks on this record that are a little different. Although often pigeonholed as "power pop", Biters are a rock n' roll band first and foremost. And this EP is their most rocking to date - rife with the thundering guitars and anthemic choruses of their arena rock heroes. And the way it was recorded, completely without auto-tune, also hearkens back to that golden age of rock. No technological trickery here, folks: just a super-tight band clicking on all cylinders! Opening track "Hallucination Generation" offers a lyrical tip of the cap to Cheap Trick, a band that Biters have been compared to a few thousand times. Sonically, it brings a slightly harder edge compared to previous releases. I dig! "Hell Is For Babies" takes that heavier approach to another level of awesome, infusing a crunching hard rock sound with immensely catchy pop hooks. And "Evil Eye" is almost completely unexpected - a glam-influenced power ballad with an epic feel. If "So Many Nights" is the band's "The Boys Are Back In Town", "Evil Eye" is their "Bringin' on the Heartbreak"!

Last of a Dying Breed had a lot to live up to on the heels of three seemingly perfect EPs. But as usual, Biters have taken their time and given us something special. "So Many Nights" may be the band's best song yet, and I love the move towards a harder, bigger sound. These guys are more than ready for full-fledged rock stardom. Tuk is without question one of the best songwriters out there, and Matt absolutely kills it on lead guitar. I used to think there could be no better part of a Biters song than the chorus, but the guitar solos on this record are just sick! Remember real rock n' roll? Biters sure do! They have turned out a number of hits over the years. Now they're giving us anthems. Crank this bad boy loud!

ok...they're good but...
Are you sure that this time they really send the cd or the vinyl?
I'm still waiting for their last LP or for my money back...sadly I'm not alone !

Thanks for your vey good blog!

AWESOME BAND !!! great review , thank's Lord Rutledge for discover me this awesome Band. For me the best Rock 'n Roll Band in this moments. Thank's for your wonderfull Blog !!!!!!!!! Many greetings from Spain.