Betty Machete and the Angry Cougars! 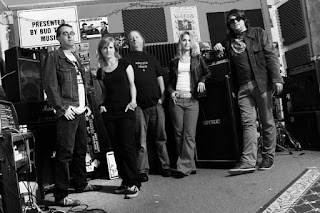 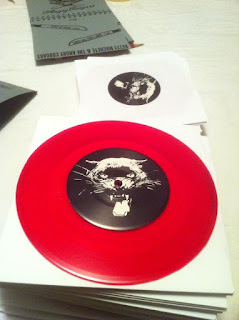 First off, they've got one of the greatest band names ever. Secondly, they're from Ohio. Thirdly, my old pal Pat Dull (Media Whores, Break Up! Records) is in the band! Really: what's not to like about Betty Machete and the Angry Cougars?! In existence for about a year-and-a-half, BMAC have just released their first single. And hot damn, is it ever a ripper! If you combined the degenerate warp-speed ferocity of the Dwarves with the face-smashing aggression of Black Flag and the fireball tough-chick swagger of more recent outfits like The Loudmouths and Deady Weapons, you'd have a band almost as good as Betty Machete and the Angry Cougars. I believe this is Ms. Machete's first foray into singing, and she sounds like she was born to holler into a mic. Trust me: she is not someone you want to mess with. Think twice before cutting in line in front of her at Kroger. And befitting a band called the Angry Cougars, this group plays with unbridled aggression and pummeling power. "Don't Call The Cops" is a fast and furious burner, while "Book Of Hate" eases off the pedal but strikes with violent force. This is your basic angry punk rock music, and BMAC pull off the style exceptionally well. Sometimes bands like this are erroneously assumed to be all attitude and no talent. But even when it comes to the harder stuff, quality punk rock requires good tunes and tight musicianship. In every department that matters, this band just straight-up kicks ass. If you've been wishing upon a star for a MILF version of OFF! to come along, your prayers have been answered!

http://www.facebook.com/AngryCougars
Posted by Lord Rutledge at 6:54 AM