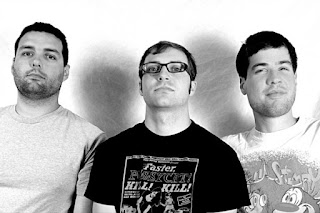 I'm not sure what a legendary wing actually is, but I'd like to think it has something to do with fried chicken, a video game, or the hometown hockey team. Regardless, it's a cool name for a band. Legendary Wings are from Kalamazoo, Michigan - birthplace of Bell's beer, Gibson guitars, and football star Greg Jennings. This band managed the rare feat of sending an unsolicited demo to Dirtnap Records and actually scoring a label deal. That means that they're, uh, really good. Their debut album Making Paper Roses is out on Dirtnap, and not surprisingly it fits in quite well with the rest of the roster. Think garagey pop-punk with a double shot of caffeine. But I also hear similarities to other top bands of the moment like Cold Warps and Tenement. These guys are really into the lo-fi pop thing, and they seem heavily influenced by the post Husker Du/Replacements alt rock sound of the early '90s. So while they have a great deal in common with most of their label mates, they're also quite unique in the way they put all these elements together. They remind me of a band I would have loved back in college circa '92-'93. But in a lot of ways they're typical of what I'm into now. In short, Legendary Wings freakin' rule!

Making Paper Roses generally sounds noisy and frenzied, and all in all it has a rough, almost "demo" quality to it that's actually quite appealing. Sometimes with punk music, you just don't need a whole lot of polish. Forget about spending a gazillion dollars making a "perfect" recording. These guys are all about a loose, live energy and quality songwriting. And while some of the hooks are buried somewhat beneath the distinctly Midwestern grime, they do not go unnoticed. This is, from top to bottom, an impressive debut album. If blown-out, hyper-fast songs like "Too Far" and "Time" are typical cuts on this album, they are far from the only tricks in Legendary Wings' bag. "Lover" sounds like the Buzzcocks by way of the Marked Men, while the poppy "I Think I'm Dumb" is like '77 punk meets Minneapolis 1981. "Spacehead" has got a lo-fi Beach Boys vibe to it, while "Cartoon" turns on the jangle to wonderful effect. Surely from a fidelity standpoint, this group will go on to make "better" sounding records. But Making Paper Roses will be a hard record to top. Is it just me, or has this been one of Dirtnap's best years ever?

http://www.facebook.com/legendarywingskalamazoo
Posted by Lord Rutledge at 8:30 AM

Do you find it odd that the band pic has three 'people' but two shadows? Two point lighting combined with a cameta flash should eliminate ALL shadows behind them...