The Registrators or Teengenerate? (Or Guitar Wolf?) 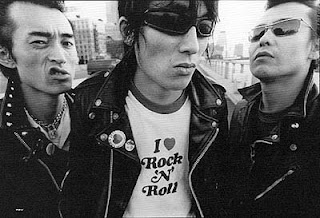 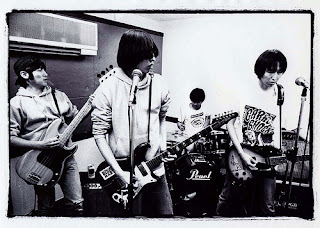 The Japanese may not have invented rock n’ roll, but they damn sure perfected it. Outside of the British Invasion and the first wave of punk rock, I don’t know if one country, in a single era, has ever produced a greater trio of bands than Teengenerate, The Registrators, and Guitar Wolf. If you’ve followed punk and rock n’ roll music within the last 15 years, surely you bow down to the indubitable supremacy of all three groups. You know where I’m going with this, don’t you? It’s band battle time again, and since it’s the holiday season I figured I should take it to an epic level. So, then! If you had to pick one of the above, who would it be? Teengenerate, godheads of garage-punk? The Registrators, who took punk music a thousand years into the future? Or would it be the prolific and all-powerful Guitar Wolf? I know, I know: it seems almost cruel to make you choose. So I’ll play along.
You could make a strong case for The Registrators, who may have released the best two Japanese punk albums in Terminal Boredom and Sixteen Wires. You could make an equally strong case for Guitar Wolf, who’ve been criminally underrated in spite of a two-decade run of unceasing greatness. But I’m going with my gut here. Teengenerate demonstrated that the best rock n’ roll doesn’t necessarily come from sophisticated composition or technical proficiency. Instead, it comes from the heart and the soul. Rock n’ roll is freedom. It’s danger. It’s sex. In all those respects, Teengenerate “got” rock n’ roll. Hell, Teengenerate WAS rock n’ roll! With just three chords, crappy production values, and sloppy instrumentation, Teengenerate made some of the most exciting and inspired rock n’ roll music this world has ever known. If they weren’t the single best punk group of the 1990s, they were at least in the conversation. Guitar Wolf may have outlasted them, and The Registrators may for a time have surpassed them. But all things considered, Teengenerate was the greatest.
The floor is yours, dear reader.
-L.R.
Posted by Lord Rutledge at 9:22 AM

Teengen for me, too. "Sex Cow" is one of the greatest songs ever "produced." Guitar Wolf are a close second, though. I am beyond lucky to have seen them at Route 44 in VB. You couldn't write the history of the place without mentioning GW. Speaking of which, my 44 tribute should be finished in a couple weeks. Check the B.A.G. for the link.

I like TEENGENERATE but.... and you knew this was coming... Im gonna stick with THE REGISTRATORS. GWs stuff is cool, but all around, The REGs seem to fulfill all my wants... no one is surprised by my choice are they?

I'm gonna agree with Shawn. Teengenerate and GW are totally amazing, but there's just something about Registrators that put them in their own category.

I also have to ask, what about the Jet Boys?

This blog rules! Used to read Now Wave all the time. Glad this exists.

And Teengenerate all the way. Guitarwolf was the gateway band for me when it came to the japanese garage punk stuff, but hearing Teengenerate was as life changing as hearing the Ramones and the Dictators.
As for the Registrators, always liked them, but i found their albums kinda boring compared to Teengenerate (singles are great though) Terminal Boredom i was expecting to floor me, but I find the songs just aren't as strong as their reputation. It SOUNDS great, the cover is great...but I wouldn't put it in my top 5 favourite Rip Off albums at all. I think Sixteen wires is better actually.

Teengenerate has better sounding albums that Guitar Wolf IMO, but I saw GW live and it was the best show I'd ever seen. GW pulled a guy from the audience on the stage to play guitar, then the guy tried to run off the stage (maybe he was scared?) but GW pulled him back without touching him. The guy basically went flying back onto the stage. Both me and my friend saw it and it was definitely weird. And walking on top of the audience playing the guitar was cool too.