Some Rock n' Roll from The No Tomorrow Boys! 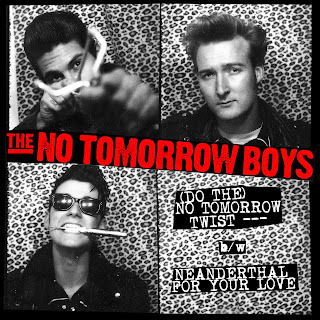 I'd be hard-pressed to name a single greater era of music than punk rock 1977-79. But American rock n' roll 1955-59 just might have it slightly beat. Sadly with modern bands that take inspiration from the latter, you rarely hear the danger and wildness of the original sounds. Too many '50s style bands soften the edges of rock n' roll and come off "cute" or "old-fashioned". The fuck-off attitude somehow gets lost in translation. Thankfully there are exceptions. Coming on like an Americanized Guitar Wolf or The Cramps sans the horror theme, Portland's No Tomorrow Boys get it right! On their debut single, these three fellas uncork a pair of primitive rippers that would not sound out of place on a mixed tape with Gene Vincent, Jerry Lee Lewis, Link Wray, and Little Richard. This is the REAL DEAL, kids! Any old band can ape the style, but The No Tomorrow Boys have the fire in the soul to genuinely capture the unholy essence of early rock n' roll. It has been a while since I've come across a new band in this mold, and let me tell you it's a real jolt to hear music like this again! These tunes are wild and fun and supercharged with sex (in other words, the opposite of what typically passes for "indie" rock in the year 2011!). If classic late '50s motorcycle gang leather jacket-and-switchblade rock n' roll replete with a bawdy backbeat, howling juvenile delinquent vocals, and red-hot guitar action sounds good to you, well then you have good taste. And The No Tomorrow Boys should be right up your alley! Remember that Richie Cunningham and his pals had a band? They were kind of soft for a rock n' roll outfit! I bet The Fonz would have far preferred to bone his babes while listening to The No Tomorrow Boys. Dig!