Neighborhood Brats are where it's at! 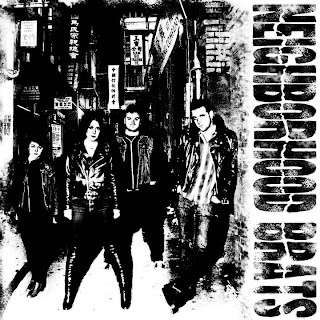 If you’re into classic female-fronted hardcore punk, you’re gonna go apeshit for San Francisco’s Neighborhood Brats! Jenny Angelillo (ex Orphans) and George Rager (Roofie and the Nightstalker) teamed up with Jasmine Watson and Kirk Podell (Neo Cons) late last year to form this fearsome foursome, and already the band’s got an EP out on Modern Action Records. And by the way, it’s great! Song titles like “Fast and Loose” and “Trampage” are not ironic – this is full-on blistering old school hardcore in a Circle Jerks/early Black Flag vein, with the vocal feel of The VKTMS. Good stuff! Available in CD, digital, and one-sided 12” formats, this five-songer flat-out rips. Every song is right around one minute and forty-five seconds long, and nothing is held back! I am talking total smash-you-in-the-face ferocity, but with catchy tunes a la Deadly Weapons. The Orphans were cool, but the Neighborhood Brats are twice as good and still on the rise! Dig “Lurking the Loin”, which will get you off if you like, uh, OFF! From what I’ve been told, this band absolutely destroys live, so it seems likely you’ll be hearing a lot more from Jenny and co. And by all means, check out Modern Action – the best new label going! It’s run by Johnny (The Bodies/Radio Records) and friends, and they are quickly cornering the market on all the best bands out there! They’ve already done releases for Smogtown, The Stitches, the Modern Pets, and Sharp Objects among others. Coming next is an Amoebas full-length!
- L.R.
http://modernactionrecords.com/
http://www.facebook.com/neighborhoodbrats
http://www.myspace.com/neighborhoodbrats
Posted by Lord Rutledge at 9:34 AM

I would personslly love to hear something from you about the stitches latest... or Greg... or Gunny... Somebody point me in a direction to go boom.

Not me. I've only got two of their songs on comps.

You can spin "Monday Morning Ornaments" on the Stitches' ReverbNation page. Think you'll like!

One of several new favorite bands!