Modern Pets are not so tame! 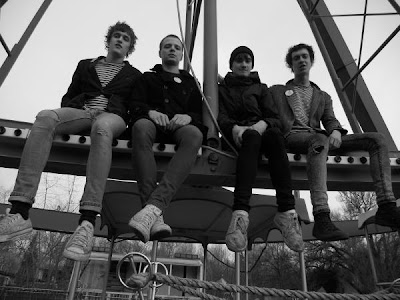 If you’re like me and make no apologies for loving tried-and-true pogo punk, ’s Modern Pets are probably already on your radar. Formed around two years ago and now terrorizing the great city of , the Modern Pets combine the best elements of early Briefs and later Stitches. If that doesn’t sound completely awesome to you, then why are you reading my blog?! The band’s latest EP, “Vista Alienation”, is out on Modern Action Records here in the States. Hot damn, is this thing ever a jolt of energy! Spin it a couple times, and you won’t even need that can of Spike Shooter! Wild, crazy, and snotty as fuck, all three songs burn it up at just over two minutes a pop. I’m reminded a little of primo mid 2000s French bands like the Hatepinks and Neurotic Swingers – and that can only be a good thing! Now it’s the Germans’ turn to seize the stripe-shirted torch. These lads from the land of brats do the memory of The Pack and PVC proud. They have cool names like Automatic Axel, Toby Dishrag, Jay Hell, and Hustler, and they come up with highly sensitive song titles like “Killing Sounds for Rotten People”. But what really matters is that their music is freaking great! The style is basic, but it is executed with manic gusto and maximum catchiness. This sort of herky-jerky, “’77 punk on amphetamines” trip may not be everyone’s cup of tea. But I’ve always been a sucker for an unbridled pogo party. And the Modern Pets are one of the best bands in this vein to come down the pike (or autobahn!) in quite some time. A full-length album is in the works and will surely blow all our sorry asses away. In the meantime, order “Vista Alienation” or download it off iTunes if you’re “modern” like me (ha!).

I wanna be modern...

Listening to them right now! In lockstep with PVC and the Pack, for sure. Kidnappers, too.

You could make one hell of a German punk rock mixed CD, that's for sure! Now I wanna drink a Helles lager.