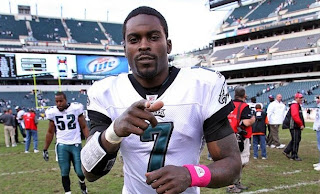 Dream team, my ass! My Eagles will be lucky to go 9-7 this season. Sure, they upgraded in the secondary. Sure, they’ve got weapons all over the field on offense. But they’ve got perhaps the worst linebacking corps in the NFL, a mediocre-at-best offensive line, and a star quarterback who never adjusted once defenses figured out how to stop him late last season. If Mike Vick plays a full season without sustaining a major injury, it will be a minor miracle. And if freaking Vince Young has to take over at quarterback for more than a couple games, forget about it! Season over. Seriously, if this team somehow wins the NFC East, I will publicly admit that Andy Reid is the greatest coach in the history of the franchise. Maybe I should anyway.
Elsewhere, here’s how I see it playing out:
The winner in the NFC East will be neither this year’s paper champion Eagles nor last year’s paper champion Cowboys. I like the Giants to take the division with a 10-6 record. The Packers and Falcons will cruise to division titles, and the NFC West will be a mess as always. The 49ers will play well for new coach Jim Harbaugh, but poor quarterback play will be the team’s undoing. The same fate awaits the Cards and Seahawks. In the end, will be the default division winners at 9-7. Look for Sam Bradford to surpass 3500 yards passing and 25 touchdowns. Wildcards will be one surprise () and one non-surprise (). The Lions are probably still another year away from really breaking through, but I think they’ll slide into the playoffs at 9-7 (beating the Cowboys in a tiebreaker).
I forecast a very predictable year in the AFC, with the usual suspects dominating. , , , and - perennial powers led by franchise quarterbacks – will be landslide division winners. Baltimore, a great all-around team stuck in the same division as the Steelers, will be a wildcard at 11-5. The obvious choice for the second wildcard is the Jets, and a lot of people are talking up the Texans. But I’m predicting a surprise renaissance for the Denver Broncos and new coach John Fox, who will go 9-7 and get the second wildcard spot. The Jets and Texans will both go 8-8. Also look for the Cleveland Browns to make a serious playoff push.
In the playoffs, the 13-3 Falcons will ride home field advantage all the way. The AFC games will be fiercely contested, with the riots the last team standing. The s will win the Super Bowl in a rout, giving Bill Belichick his fourth ring. The “Andrew Luck bowl” will be won by the 2-14 Bengals, although the Redskins and Bills will stay in the running to the end.
Take these insights to Vegas. If you win big, all I want for my cut is a four-pack of Founders Breakfast Stout.
- L.R.
Posted by Lord Rutledge at 12:46 PM

Darren Sproles is on the Saints? When did that happen?

The Texans will once again be a crapshoot. I could see 'em going 11-5 and sweeping the Colts. A 7-9 campaign with several last-minute losses to lousy teams wouldn't surprise me, either. Thought about breaking all childhood attachments to the Redskins, but they should provide me with plenty of laughs this season. I can appreciate a sense of humor. Not to mention Riggo's entertaining post-game comments.

If Peyton Manning is as injured as I suspect he might be, that changes the Texans' chances in a hurry.