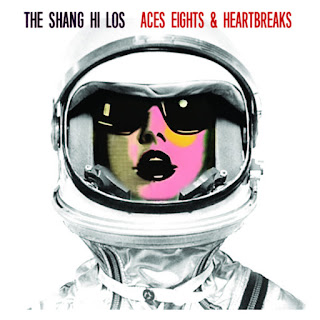 Can you believe it has already been two years since I first prayed to the music gods for a Shang Hi Los full-length album? Having now had said album in my possession for a couple weeks, I will reiterate one of my core beliefs: music this good is always worth waiting for! Heading into 2023, the Rum Bar Records release Aces Eights & Heartbreaks was hands-down my most highly-anticipated album of the year. Not so long ago, I publicly predicted the album would be a "blockbuster." I must say it has proven to be all that and then some.
To recap: The Shang Hi Los formed in 2019 and feature two of the finest singers and songwriters in modern-day rock and roll. Dan Kopko (Watts) and Jen D'Angora (The Dents, The Downbeat 5) are co songwriters and lead vocalists. They're joined by bassist Lee Harrington (The Neighborhoods, Future Dads) and drummer Chuck Ferreira (Eddie Japan, Lonely Leesa & The Lost Cowboys). The 2021 EP Kick It Like A Wicked Habit was a promising debut for this Boston super group, but Aces Eights & Heartbreaks totally blows it out of the water. While the influences for this release vary from garage rock to new wave to punk rock to power pop to spaghetti Westerns, what comes through here is that The Shang Hi Los are above all else a great rock and roll band. And the world can always use more great rock and roll bands. This record has got it all: killer riffs, magnificent vocals, radio-worthy choruses, awesome guitar solos, epic drumming, massive production, and melodies that will stick with you. The Shangs are the rare all-star group that's even more than the sum of its parts. Kopko and D'Angora work so well together (both vocally and as a creative partnership) that it's hard to believe they haven't been collaborating forever. Here and there, I might find myself saying "That sounds like a vintage Danny Kopko riff" or "This could have been a Jenny Dee song." But for the most part, The Shang Hi Los sound like something neither songwriter could have fully created on their own.
Like any great rock album should, Aces Eights & Heartbreaks comes roaring out of the gates. "Takes One To Know One" is energetic, fun, and musically irresistible — a side 1/track 1 that even prime Cheap Trick would have envied. "Monsieur Valentine" sounds like the best Blondie song in decades (if it's not released as a single for Valentine's Day, that will be an opportunity missed!). With the bar set that high, the Shangs keep it going all the way to the end. The title track is a legit good stab at disco pop that has "couples' roller skate 1980" written all over it. "Plymouth Rock" is perfect punky power pop. "These Four Walls" and "Ingenue" are pure rockers with hooks for days. And of course there's "Billy" — a recently anointed Coolest Song in the World on Little Steven's Underground Garage. Why did I wait so long to mention the hit? Well on an album like this one, every song's a hit!
Aces Eights & Heartbreaks represents everything that's wonderful about rock and roll. It features two excellent singers who sound great both individually and in harmony. It's stacked with stellar tunes that will have you tapping your toes, singing along, and breaking out the air guitar and drums. I wouldn't exactly call it "retro," but it recalls a time when they still played great rock songs on the radio. When these songs are playing, it's an eternal summer. God bless Malibu Lou for unleashing this masterpiece in the middle of January and laying waste to our collective winter blahs. The bar is always open!
-L.R.
https://rumbarrecords.bandcamp.com/album/aces-eights-heartbreaks
https://theshanghilos.bandcamp.com/
https://www.facebook.com/ShangHiLos
https://www.facebook.com/RumBarRecords
Posted by Lord Rutledge at 5:52 PM