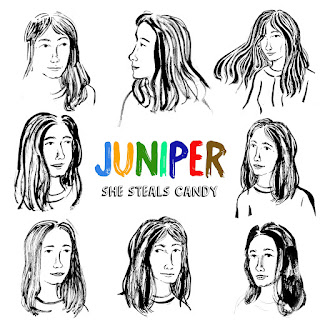 One of the real bright spots in the dumpster fire of a year that was 2020 was the wonderful debut album from teenage singer Juniper. In collaboration with her dad (the veteran singer/songwriter and esteemed WFMU radio host Michael Shelley) and a star-studded cast of musicians, Juniper gifted the world with one of the most joyful guitar pop albums of recent memory. I named Juniper a top ten album for 2020, and in retrospect I wonder if I should have rated it even higher. I suppose the only downside of such an auspicious debut is that it creates very high expectations for the encore. How do you follow up a perfect pop album? Well, if you're Juniper and Michael Shelley, you just go out and make another one!

She Steals Candy is no mere copy of its predecessor, but it repeats all the core ingredients of a winning recipe. Again, Michael Shelley produces and enlists the contributions of all sorts of talented friends. Notable guest players on this album include Greg Townson (Los Straitjackets), Chris Geddes (Belle and Sebastian), Steve Goulding (Mekons), John Perrin (NRBQ), Alex Hall (J.D McPherson), Dennis Diken (The Smithereens), April March, Megan Reilly, Rebecca Turner, Karen Basset (The Pandoras), Barbara Endes (Girls On Grass), Ira Kaplan (Yo La Tengo), Page Burkum (The Cactus Blossoms), Kurt Baker, and Jon Grabo (Ryan Adams). The album mixes in a handful of original songs with an extraordinary selection of covers. While contemporary in every respect, She Steals Candy recalls the golden age of pop music — when there was no shame in working with stellar session musicians or interpreting someone else's songs. A lot of incredibly talented people had a hand in the creation of this record, and what results is something truly special.

While still a teen, Juniper is a young adult now. Her vocal tone now carries more richness and gravity while still retaining the likeable, down to earth quality that made her an instant sensation. She gives The Sails' Brit-pop smash "BANG!" an added touch of melancholy — taking a great song and fully making it her own. Her interpretation of Amy Rigby's "Baby Doll" just about gives me chills. Without over-singing, she brings the hurt, sadness, and ultimate strength of the song's lyrics to life in a way that will be relatable to any young woman her age. She applies a similar magic touch to The Bangles' "James" and The Go-Go's' "Turn To You" — a couple of songs that were ripe for a reinterpretation after nearly four decades. Elsewhere, the Shelleys dig really deep, unearthing such forgotten gems as David "Del Ashley" Gates' 1965 single "Little Miss Stuck Up" and Johnny Fortune's 1964 track "Don Stole My Girl" (re-worked here as "Dawn Stole My Guy") along with four songs originally recorded by The Ron-Dels — Delbert McClinton's marvelous mid-'60s rootsy rock and roll band. Also delightful are a Latin-flavored arrangement of the Lisa Marr/Kim Shattuck number "Taste the Soup" and a bossa nova version of the Gene Simmons song "See You Tonight" (yeah, really!). Album closer "I've Gotta Boy" is a cover of First Base's modern punk-pop gem "I've Got a Girl." Guitarist Tallulah Buscher plays on the track — using the same guitar, amp, and pedal that her mom Melanie Vammen used on the first Muffs album! The songs written for the album fit in splendidly. The title track, which is full of warm '70s vibes, celebrates a kinship with one's far-cooler alter ego. "Alone with You," co-written by the famed writer Dawn Eden Goldstein & Peter Horvath from The Anderson Council, is a perfect power pop song. "Ride Between the Cars" hits quickly with a melody that I can't get out of my head.

We didn't have to wait very long for the first great album of 2023. If melody-driven guitar pop is your thing, She Steals Candy is the album for you. And if you liked the first Juniper album, you are certain to like this one even more. From the vocals to the musicianship to the production to the arrangements, everything about this album hits the spot. At a time when we're conditioned to think of cover songs as filler, it's a joy to come across a record like this that celebrates great songs. Juniper and Michael Shelley chose to record all these songs because they love them, and they'd be the first people to encourage you to seek out the original versions. I also like that if you didn't already know that most of these songs were covers, you'd probably mistake them for originals. All these tracks fit together perfectly. Even as it finds Juniper stretching herself genre-wise, She Steals Candy at its core is an indie power pop fan's delight. Singing along is both unavoidable and good for the soul. The album is out today on Confidential Recordings and Fabcom Records!

I always meant to get her debut but only streamed it on Bandcamp. But I saw there's a deal there to get both CD's at a special rate, so I picked 'em both up!