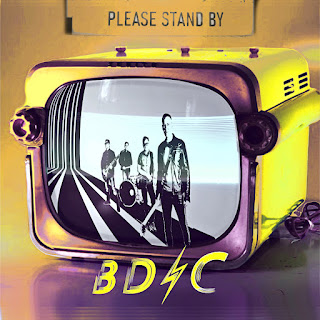 I have had the pleasure of reviewing a few singles from The Bishop's Daredevil Stunt Club in the recent past, and today I get to dig into a full album from this Chicago-based power pop group! Please Stand By is the band's first album since 2019. The title is an amusing nod to the lull between albums precipitated by an unprecedented global pandemic. Weren't all of us trapped in "please stand by" mode at some point over the last couple of years? For a while, it was uncertain if this band would even live to make another record! But here we are in the summer of 2022, and The Bishop's Daredevil Stunt Club is ready to resume its regularly-scheduled programming. Singer/guitarist William Giricz wrote 27 songs for this release, giving the band plenty of material to choose from as it assembled this 12-track long player. What results is an album very typical of The Bishop's Daredevil Stunt Club: a collection of hooky, rocking tunes overlapping the worlds of power pop, '70s arena rock, and '90s alt-rock. This release worships at the altar of a certain band from Rockford, and that can only be a good thing (especially when you've got a singer with pipes like Giricz!).

If you missed out on the BDSC's superb run of singles over the past year ("Tremor Control II," "Hold You Up," "Fifty Foot Woman"), you're in luck: they're all included on the album. Other obvious hits include the big rocking opener "Pony Up" (a song which dares us all to go out there and live it up), the textbook power pop of "Joni, It's Not Like That," the frenetic glam rock of "Silverball," and the unabashedly Cheap Trick-ish "Taking A Dive." Giricz and powerhouse drummer Dave Boenzi put on a rock clinic over the course of these 12 tracks, treating us to a tasty selection of should-be radio hits and premium deep cuts (on "Bah Bah Bah (Sing Along Song)," Giricz summons his inner Freddie Mercury to delightful effect). An album three years in the making, Please Stand By has a triumphant feel to it. The Bishop's Daredevil Stunt Club has been un-paused and turned loose to rock. This is a perfect album for the mid-summer and a highly recommended release for those who like their power pop with plenty of power. It's available now from Bandcamp, Apple Music, and Spotify!