Danny Despicable - All the things I wish that I could say 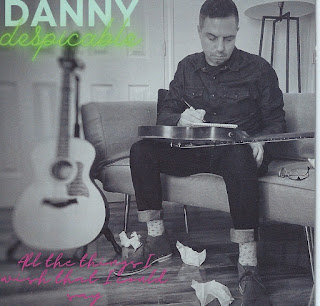 Seldom in life does it work out that when you're left wanting more, you actually receive more. But in the case of Danny Despicable's new EP, I have been fortunate to have more than doubled my exposure to this exceptionally talented songwriter. Danny Despicable is Daniel Seliski, guitarist in Breaklights. On Breaklights' new album Wind Down, Dan wrote and sang three tracks. I was especially blown away by the songs "Aging Well" and "Fairview, 1991" -- two of the album's standout numbers. Immediately I found myself looking forward to more "Dan" songs on future Breaklights releases. Much to my delight, it was brought to my attention that no waiting was necessary since Dan has released a solo EP as well. All the things I wish that I could say marks Dan's triumphant return after a 15-year hiatus from writing and singing his own songs. As he struggled adjusting to pandemic life in 2020, he found solace in writing new material. A few of those tracks ended up on Wind Down, but another five became All the things I wish that I could say. The title pretty much says it all: these are Dan's deepest thoughts and emotions conveyed through song. Listening to his songs on Wind Down, I was blown away by Dan's honest reflections on dealing with life's disappointments and unexpected turns. I was hoping for some similar songs on the solo EP, and I was not letdown. So if any of you enjoyed Dan's contributions to Wind Down as I did, I highly recommend checking out All the things I wish that I could say as well. A couple of tracks are straight-forward pop-punk, but my favorite songs here are in what you'd call a "singer/songwriter" style. I like the intimate feel of songs like "Everything I've Got" and "Better Or Worse." The arrangements are simple, and Dan focuses on pouring out his heart. On "Everything I've Got," he agonizes over what could never be. "Better Or Worse" could almost be a companion piece to "Aging Well." One of Dan's strong suits as a writer is in confronting how life rarely unfolds as planned. This can be true for an individual or for two people growing and changing together.
While officially a Danny Despicable solo effort, All the things I wish that I could say also features the contributions of Steve Lopez, Mark Reed, Bryan Bush, and Tron Carter. Dan has written more songs for this project and intends to make it a full-time band by the end of 2022. The "rockers" on this EP (especially "Norway Bound") are great fun, but for me it's the three ballads that justify the price of admission. I'm not usually a big ballad guy, but these ones are tremendously well-done and really moving. You can stream this EP from Apple Music or order a copy on compact disc from Otitis Media Records!
-L.R.
https://music.apple.com/us/album/all-the-things-i-wish-that-i-could-say-ep/1619633296
https://otitismediarecords.com/products/omr-053-danny-despicable-all-the-things-i-wish-that-i-could-say-cd-ep?_pos=1&_psq=danny&_ss=e&_v=1.0
https://breaklights.bandcamp.com/album/wind-down
https://www.instagram.com/danny_despicable_music/
Posted by Lord Rutledge at 10:48 AM