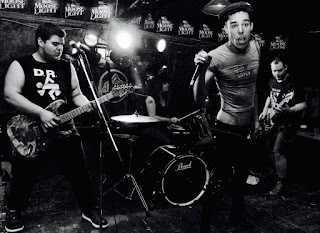 Perhaps the only silver lining in the world having gone to complete shit has been the recent explosion of digital music. For example, I love the idea that a defunct band from Atlantic Canada can throw an unmixed EP from six years ago up on Bandcamp and absolutely knock my brains out! Moncton-based Impulse Items roamed the filth-strewn Dead Boys/Germs side of the '77 punk tracks, but with a ferocity bordering on hardcore and a sense of humor that can only be described as rather unique. You see a song title like "I'm A Punk Masturbator" and can quickly deduce that it has to be the worst song ever or the absolute greatest. Somehow it manages to be both at the same time. So many punk vocalists do their best to channel the mad genius of Iggy, Darby, etc. and inevitably fall short. But this guy Danny was the real deal - at least in respect to the "mad" part! These six tracks are as raw and crazy as it gets....and awesome in every way. I like that the lyrics have been published, which enables you to go from "What the fuck?!" to "That's goddamn brilliant!" in a matter of moments. You could have waited for Killed By Death #174 to hear these songs, but modern technology and good fortune have collided and bestowed this glorious noise upon us. This band made the Reatards sound like Coldplay. And yeah, that's Emily from Phone Jerks on drums. Someone demand a reunion!