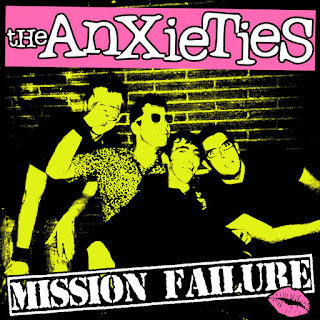 The Anxieties' latest album has been quite a long time in the making. Seriously: in the years it took the Portland foursome to get Mission Failure made, the band's lyrics had to be re-categorized from science fiction to non-fiction. All of that paranoia, distrust of the government-entertainment complex, and wariness of constant surveillance don't seem too far-fetched at a time when our televisions are literally recording our conversations and artificial intelligence can recognize our faces in photographs. Alexa, play The Anxieties!

To the best of my knowledge, this is the Anxieties' first full album of new material since Under Surveillance, which was recorded back in 2009-2010. The band started writing Mission Failure a decade ago, but a series of lineup changes led to a number of delays in the completion of the record. One thing led to another, and suddenly Scott Von Rocket and company were considering that the album title was turning into a self-fulfilling prophecy. Perseverance ultimately prevailed, and here we are in 2019 with a new Anxieties full-length finally in our possession (LP release to be announced). Man, do we ever need this band more than ever! Mission Failure is probably the most focused display yet of The Anxieties' musical vision. These songs re-imagine the surf-inflected melodic punk of early '80s southern California for our 21st Century dystopia, with a touch of that post Dirtnap Records garage punk/pop in the mix as well. The title track has the band emphasizing melody more than ever before, while "Atlantis Rising" flexes surf rock instrumental chops in a major way. But more than anything else, this album finds The Anxieties ripping it up old school style. Six of 14 tracks don't even hit the two-minute mark, and several more barely exceed it. Songs like "Blank Stares", "Hypnotised", "Panic Room", and "Radio Silence" are fast and frantic thrillers - fully exuding the anxious tenor of our times. There's a spastic quality to many of these songs that has long been a hallmark of Von Rocket's bands. And that perfectly fits The Anxieties' brave new world vibe. While many of these songs were written by a much earlier version of this band, the new lineup sounds amazing and definitely manages to put its own stamp on the material. Pretty much everyone who's been in The Anxieties over the past decade has had a hand in making this album what it is. And you never really mind waiting for a record when it turns out this awesomely. Mission Failure is highly recommended listening whether you're skateboarding, circle dancing, or privately contemplating your growing dread of science gone too far.

Email ThisBlogThis!Share to TwitterShare to FacebookShare to Pinterest
Labels: The Anxieties