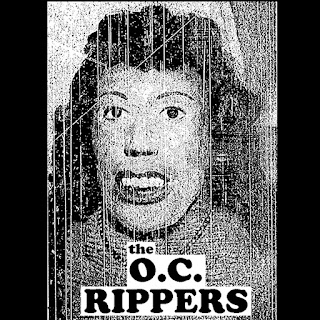 Greg Mongroll has been tipping me off to great new bands since the days when he was one of the three people who followed this blog. He never lets me down, which ultimately means he never lets you down! His latest find is The OC Rippers, a new project hailing from Ocean County, New Jersey (hence the "OC" in the band name!). The OC Rippers have emerged with a demo tape that you can download for free or purchase on cassette by emailing the band. What I like about this demo is that it reminds me of my early days in the punk world - when it was always so cool to discover a demo tape from a new band. A little bit of that magic has been lost in our modern-day digital world, when bands post "demos" online that often just sound like studio recordings. But The OC Rippers' demo actually sounds like a demo I would have played the hell out of in 1995. It's lo-fi but not really "garage". This is just good stripped-down old school punk. Sometimes the band comes out ripping it fast and hard ("Never Coming Down"). Other tracks like "Look Your Best" are slower in tempo and crudely performed in a charming pre-punk/early punk way. I love that there's nothing I can compare this band to directly. If they have influences, they're not made obvious. The keyboards on some of the tracks are a neat touch as well. I still don't feature new bands as often as I'd like to, so I must thank Greg for helping me out a little. Be the first on your block to get hip to The OC Rippers!

https://ocrippers.bandcamp.com/releases
Posted by Lord Rutledge at 6:35 AM