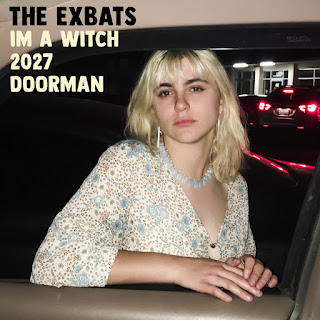 For the past four years, Madrid's Jarama 45RPM Recs. has made a name for itself as one of the most dependable labels on the planet. Bernardo only releases 7" records, and he sure knows how to pick the hits! His latest release features Arizona trio The Exbats, who have been standouts on the Burger Records roster since 2016. If you live outside the U.S.A., Exbats releases might be hard to come by. That changes with the arrival of "I'm A Witch" - the band's first European release. For this project, Jarama 45RPM selected a couple of essential tracks from The Exbats' 2018 cassette I Got The Hots For Charlie Watts along with a brand new song called "Doorman". If you're already a fan, "Doorman" alone makes this a worthy purchase. If this is your first exposure to The Exbats, these songs will have you wanting to hear everything the band has ever released! This is a band that perfectly fits the general vibe of Jarama 45RPM - playing fun three-chord punk rock inspired by the songwriting structures of '60s pop and bubblegum. Drummer/vocalist Inez McLain has the attitude, charisma, and genuine personality that puts her in the top class of punk singers. She's been honing The Exbats sound for several years with her dad, guitarist Ken McLain. A-side cut "I'm A Witch" leans to the jangling and (appropriately) spooky side of '60s garage rock, with bad-ass lyrics about hexing some dude who surely deserved it. "2027" is both a righteous party punk anthem and an insightful political statement. "Doorman" is one minute and twelve seconds of pissed-off punk goodness: an exuberant sing-along that surely gets a rousing response at live shows (although maybe not from the doorman!). This release is limited to 300 copies from Jarama 45RPM, and it's available from the label's Bandcamp. Look for a new Exbats album next year!