Dogmatics - She's The One 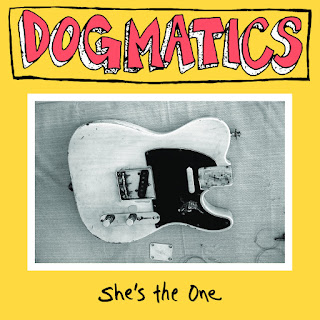 Here it is: the first new record by the mighty Dogmatics in 33 years! Rum Bar Records proudly releases She's The One this week on both 7" vinyl and CD. I won't delve too deep into the legacy of this band since I've already devoted a couple of posts to that. Suffice it to say that the Dogmatics are one of the greatest bands to ever come out of Boston. Here they are in 2019 with classic era members Jerry Lehane, Pete O'Halloran, and Tom Long all in tow. Jimmy O'Halloran holds down bass duties with tremendous love and respect for his late brother Paul. And while I would have been completely overjoyed with any new music from the Dogmatics, She's The One is no run of the mill comeback. This thing's a stone cold triumph!

What I've always enjoyed about the Dogmatics is that they were so many things at once. They had that rockabilly thing going on, but they were a punk band at heart. They wrote perfect pop songs but played them with absolute irreverence. In essence, they were precursors to nearly every band I champion today. Three decades on, these guys are older, wiser, and perhaps a little more musically proficient. But really these are still the same old Dogmatics - that one band you can always count on when all you wanna do is crack open a cold one and listen to some fun rock and roll. Jerry Lehane has penned three new songs for this release, and they are all top tunes. "She's The One" is a hot shot of power poppin' pub rock with a driving beat you will not be able to resist. If you're a longtime fan, you'll get chills hearing Jerry and Pete's unmistakable dual guitars launch into action! This is at worst my third-favorite song to ever be titled "She's The One". "I Love Rock and Roll" has more of a thumping '60s garage flavor to it. As the title suggests, it's a song that celebrates rock and roll. It pays tribute to all of the great music of the past and offers tremendous hope for the future. Songs like this can sometimes be unbearably corny, but they can also be totally fantastic. You can probably guess which side of the column I'm checking off here. This track would not have sounded out of place on the last Dogmatics album in 1986! "The Ballad of Wilbur Ross" is the one major surprise on this release. It's a very traditional-sounding Celtic folk ballad - done so well that you might mistake it for an actual traditional Celtic folk ballad!

Digital and CD versions of She's the One feature really cool bonus covers of two of the greatest punk groups to ever come out of New England. "Black Plastic Shoes" was originally recorded by The Reducers and appeared on their classic debut album from 1984. "Summertime" was a track off of Unnatural Axe's legendary 7" They Saved Hitler's Brain. Both of these songs were previously available only on tribute compilations. And in true Dogmatics fashion, the band puts its stamp on both of these songs. I was beyond stoked when I heard that the Dogmatics were joining the Rum Bar Records family and releasing new music. Now that the record is here, I could not be happier! If you already love this band, you will love these songs for sure. And if this is your very first encounter with the Dogmatics, I hope it leads you on a lifelong journey into their classic back catalog. What a damn great band!