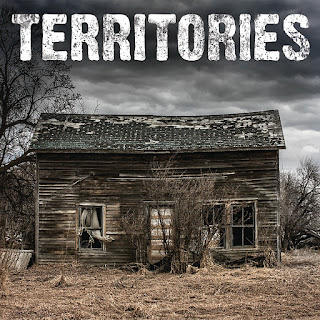 Territories are one of the best new punk bands I've encountered in quite some time, but there's a catch to that! This group actually formed out of the ashes of legendary Calgary punk band Knucklehead, who had a nearly 20-year run starting in the mid-'90s. Knucklehead split in 2013, but four former members reunited two years later with a fresh start and a new name. Without a doubt, fans of Knucklehead's tuneful, anthemic punk rock will enjoy Territories just as much. But this is a different band with a slightly different sound. The group's debut album, out on Pirates Press Records, is that rare example of punk music that can be described as both mature and powerful. Of course you can expect rousing chanted choruses and intelligent, heartfelt lyrics. Yet I can also hear the undeniable influences of '80s/'90s melodic post-hardcore and traditional folk rock. This album is a great example of why I enjoy music made by veterans of punk rock. Territories bring to their debut an even wider array of life and musical influences than those that informed Knucklehead. Yet they sound more inspired and excited than ever about playing punk music. The songwriting is top-notch, both in terms of melodic structures and meaningful lyrics/vocals. You can tell they really worked and refining and perfecting these songs. How amazing do those guitars sound! And even with the obvious progression in songwriting, these guys prove they can still get your heart racing with some exciting, fist-pumping punk rock ("New Thing", "Heart That Breaks").

I would consider Territories to be kindred spirits with a band like Swingin' Utters - who themselves are about to demonstrate that "middle-aged" guys are capable of making some of the most vital punk music out there. If you're stoked to hear the new Utters album, I would highly recommend picking up this tremendous debut from Territories as well. These guys are writing songs from the heart and playing them with conviction, and I can only hope the career of Territories is just getting started!

Holy Smokes! Now that's what in the biz they call a SONG. Great stuff. Thanks for posting.

Gotta agree. This is pretty strong.