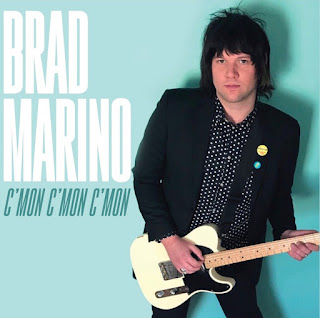 Check out my favorite song of 2018 so far! Seriously, how can you go wrong with a title like "C'Mon C'Mon C'Mon"?! Considering that The Connection is the most-reviewed band in the history of this blog, it's pretty obvious that I'm a big Brad Marino fan. I've known for a while that he was working on some solo stuff, but I wasn't quite sure what to expect (beyond Mike Chaney assuring me that it was going to be killer!). The debut Brad Marino solo EP will be releasing later this year, but first we get the "C'Mon C'Mon C'Mon" digital single. I was wondering if solo Brad Marino was going to be more like solo Mick Jagger or more like solo Keith Richards. Well, actually, it's more like Nick Lowe fronting The Ramones in 1979! This is just a great upbeat power pop/rock n' roll song that will have you bobbing your head and clapping your hands almost immediately upon contact. We are getting close enough to spring for me to envision myself blasting this tune while I drive with the windows down! In true solo fashion, Marino authored the song and played all the instruments on the track. His pal and bandmate Kris Rodgers mixed the recording. The full solo EP is slated to arrive this summer following the release of the new Connection album. If you're a fan of The Connection and/or Brad Marino, this is shaping up to be a really great year!