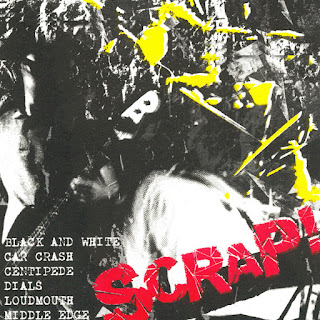 I've said it many times, but it's a message worth repeating. If you're an American fan of Japanese punk music, you've got to be extremely appreciative of what Secret Mission Records has been doing over the past few years. The label has released music from The Raydios, Louder, Dials, Boys Order, P.C. 2, Beatseekers, Car Crash, The Geros, The Fadeaways, and Ruler. These are bands whose records would have otherwise only been available as pricey Japanese imports. Taken as a whole, SMR's recent catalog affirms that Japanese punk rock continues to thrive just as it did in previous decades. Assembled by Mangrove Records, the Scrap! compilation is an additional showcase for some of the finest bands associated with Japanese punk in recent years. Secret Mission has partnered directly with Mangrove to make this compilation available in the United States. It features top-tier material from six different bands. So basically, it's like getting six singles for the price of one album...minus the import price tag!

I like that Scrap! was put together to document both the quality and variety of sounds that have been been coming out of Japan's punk scene over the last few years. The first thing that often comes to people's minds when you talk about Japanese punk rock is the garage/trash stuff, and you certainly get some of that here with three great tracks from KBD inspired crazies Car Crash. But the bands here run the gamut of punk styles, from the mod meets jittery new wave of Dials to the blistering sing-along '82 punk of Centipede to the dark post-punk of Middle Edge to the thumping three-chord punk stylings of Black and White to the pure snotty fury of Loudmouth. It's clear that Mangrove insisted on "A" level material from these bands, and that's what makes this compilation so worth the while. There are no throwaway tracks here, and I can honestly say I am looking forward to hearing a lot more from all of these groups. I was especially pleased to be so into Centipede and Middle Edge - bands who bring something a little different to sub-genres that I'm generally not a huge fan of. Over the course of just three tracks, Middle Edge manages to bring to mind The Wipers, Swedish post-hardcore, and Joy Division! My fave cut out of the 17 is Black and White's "One Way Street", which gave me a similar feeling to hearing The Registrators for the very first time back in the day. Honestly, though, I believe that six different people could listen to this comp and identify six different favorite bands from it.

I don't wanna catch anyone talking about how Japanese punk rock "used to be" so great. It still is, and Scrap! proves it!