Down and Outs - Double Negative 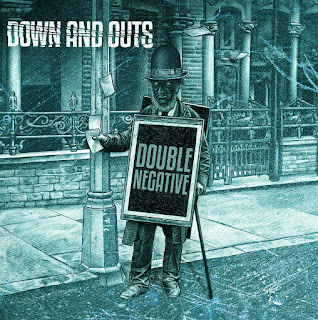 Is there anything better about doing a music blog than discovering new bands? How about discovering not so new bands?! Double Negative is already the fifth album from Liverpool based punk outfit Down and Outs, yet here I am just hearing the group for the first time (and enjoying it very much)! Releasing next Wednesday on All In Vinyl, Yo Yo Records, and Waterslide Records, Double Negative continues a recording history for this band that goes all the way back to 2004. Where in the hell have I been for 15 years?! The sound is melodic punk with gruff vocals, something that tends to be hit or miss with me. Luckily, it's a hit in this case. You can hear the influence of bands like Leatherface and One Man Army, but spiritually this music is undeniably Clash-inspired.

I always love a band that aspires to write anthems, and I can think of no better word to describe the majority of these songs than "anthemic". And that's really what separates Down and Outs from a lot of similarly styled bands. These songs are so genuinely rousing that they continually have me out of my chair and pumping my fist as if the band were right there in front of me. Mark Magill has written some very serious songs about a variety of subjects, and he really has a way of imbuing these songs with a passion that's palpable. While not fully a "political" record, Double Negative does contain a number of songs that speak to our present condition. The folk anthem "You Can Have This Country Back" is specifically about the state of affairs in a post-Brexit U.K. Yet it's remarkable how everything this song rails against is just as pervasive and problematic on my side of the pond as well. "What Did You Do In The Culture Wars?" reflects on how recent political events have emboldened those who revel in intolerance. It's based on a real-life encounter that Magill had with an individual who advocated the banishment of disabled people. As you can imagine, he did not stand silent!

When it's not political, Double Negative is deeply personal and extremely emotional. "Astoria" is a break-up song that's about as gut-wrenching and cinematic as you can get in 91 seconds. In other spots, Magill pours all he's got into songs about death and grief. Even "Heartbreak Radio", a song ostensibly about mixed tapes, digs deeper into the things from which we're often trying to escape when we turn to the healing power of music. I appreciate the amount of heart and intelligence that went into these songs. But what really brings it all home is how fervently the band sells each track. Magill sings his guts out, and the band powers through every note like it really means it. The energy is undeniable, and man do those choruses ever deliver! All in all, an absolutely brilliant album!

great band, just a heads up for those that don't know..... their earlier releases are name your price (so no reason not to snap them up) and drummer Morgan's other band, Pardon Us, play a similar style of music and are equally as good