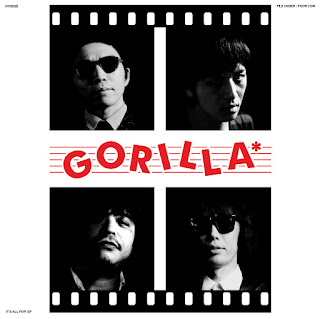 Attention, power pop fans! I've got a real treat for you today! Tokyo's Gorilla* has been around since 2011 and features Kenny Ogawa (The Cokes) on guitar and vocals along with Atsushi (Pop N Roll) on bass. Fifi from Teengenerate was the original drummer, and there's no doubt that Gorilla* ought to be mentioned in the same breath as Teengenerate affiliated power pop bands like The Tweezers and Firestarter. The band's new EP It's All Pop! was originally issued as a tour CD in Japan earlier this year, and now it gets an American release on vinyl courtesy of the Baltimore-based Hidden Volume Records. Doesn't the title pretty much say it all? If you love classic power pop, you'll be in heaven listening to these six songs. I was immediately floored by opener "Oh Tonight", which sounds so authentically later '70s power pop that you could slide it anywhere into the old Rhino Shake It Up compilation and it would not sound out of place. And nothing much changes for the remainder of the EP, with songs taking a massive influence from The Raspberries along with the likes of Shoes, Phil Seymour, Romantics, Off Broadway, and of course the almighty Beatles ("Stay With Me" is one of the finest British Invasion homages by way of the skinny tie generation I've heard in ages).

It's All Pop! is actually the second 7" from Gorilla* following an amazing single released on Three Dimensional Records three years ago. If you long for an eternal 1978 and the never ending reign of Bomp! Records, this is a band you need to be checking out immediately! Kudos to Hidden Volume for securing a domestic release for this Japanese treasure. Snag copies on banana yellow or black licorice vinyl while they're still available!

Wow!! Closest to the Bomp sound of the late seventies I've heard. It could easily pass for an unearthed Poppees e.p.

Thanks so much for thr heads up.