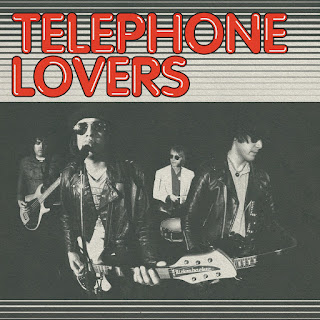 My immediate response to first hearing Telephone Lovers was to surmise that the band had to be from Los Angeles. I got that right, although I may have been about 40 years off in pinning down the time frame! Telephone Lovers' self-titled debut just screams "L.A. power pop" - and in my mind I see this band sharing a stage with The Nerves or 20/20 in 1977. Telephone Lovers take it back to a time when power pop was one of our purest forms of rock n' roll - coming on like modern day heirs to the likes of Dwight Twilley, The Raspberries, Flamin' Groovies, and Scruffs. Even with an added pinch of New York Dolls/Hollywood Brats street tough glamour, the vibe here is so perfectly mid-'70s power pop that it's not hard to imagine any of these tracks turning up on the old Rhino Come Out and Play compilation.

Having heard quite a few bands of late take some influence from the boogie-ish side of '70s power pop, I have to put Telephone Lovers up there among the very best of the bunch. They've got the red-hot guitar action down pat - but not at the expense of quality songwriting. It really comes through that these guys have great affection for classic power pop and raucous rock n' roll in general. No doubt about it, Telephone Lovers is a top ten LP for 2016. Digital album is available now from Bandcamp, and vinyl is coming in December from Wanda Records!

This is #1 of the year for me so far. Its been on repeat and cranked to 11 all week!