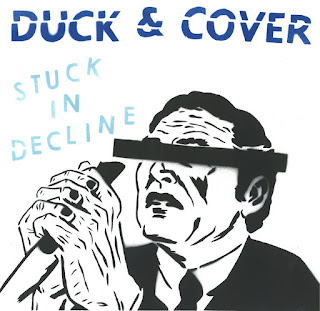 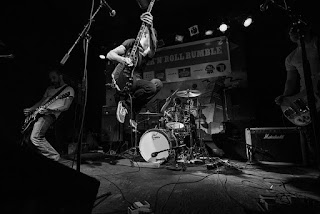 The last time I reviewed Boston's Duck & Cover, I stated that I was looking forward to future releases based on what were clearly some formidable songwriting chops. 20 months later, I'm happy to report that my expectations have totally been justified!

Typical of a Boston based band, Duck & Cover (ex/current The Coffin Lids, The Acro-brats, Bang Camaro, Black Cheers, Vampire Lezbos, The Throwaways, The Drags, Wild Zero) is all about THE ROCK. This is the type of band that you can count upon to plug in, play loud, and kick you in the ass with some high quality rock n' roll. What is noticeable about new EP Stuck In Decline is that everything sounds bigger. I'm talking the hooks, the production, and even the band's thunderous dual guitar attack. If the last EP was a well-executed fusion of hard rock and punk/garage, the vibe here is more along the lines of the great hooky arena rock of the '70s and '80s. "Yeah, Don't You" is an absolute blast - a big, catchy tune that just explodes with attitude and energy. As it comes on with guitars blazing and drums thumping, I envision Duck & Cover playing live and delighting crowds. "Wasted" is in a similar vein - a punchy melodic rocker that puts the power in power pop. "Touch & Go", with its epic guitar shredding and urgent vocal from Chris Brat, sounds like the ballsiest '80s hair metal song you ever heard. When the band wants to go into full-throttle, set-your-hair-on-fire rock mode ("Sheriff of Broken Jaw"), it still can. But what I'm generally hearing here is the kind of band that could make rock radio listenable again. A cover of Cheap Trick's "Way of the World" tips the cap to an obvious influence, and closing track "Out Alive" shows off the band's tender side without needing to go the cliche ballad route. Duck & Cover has everything a great rock n' roll band needs: a powerhouse lead singer, two kick-ass guitarists, a top-notch rhythm section, and killer tunes to spare!

It's an irrefutable law of nature that there will be a ton of great rock n' roll bands in Boston at any given time.  That continues to be the case today, and Duck & Cover is one of the bands leading the way. If you like hard-rocking tunes with big hooks, Stuck In Decline is not to be missed. Get the digital album from Bandcamp, or contact the band to order a CD!