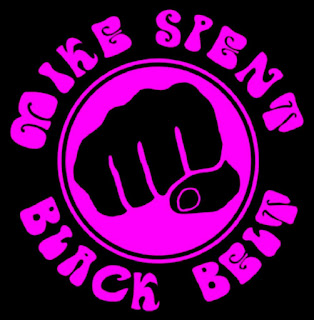 Ahhh, good old Mike Spent....he is as diehard and true of a punk rocker as the world has ever known. The Spent Idols - one of my go-to bands when I was first getting into punk rock in the mid-'90s - were heavily influential on the direction my musical tastes (and perhaps my entire life!) ultimately took going forward. And the band's beloved lead singer is still at it after 35 years plus, unchanged and undeterred by the evolving trends in music and culture. I imagine that the Spent Idols will continue to exist in some form for as long as Mike is drawing air (I imagine him someday in the old folks' home, belting out "Dance To the Beat of the Living Dead" for the enjoyment of his fellow residents). But now for something completely different, Mike has a new musical project to present to the world.

Mike Spent Black Belt is quite a departure from the '77 punk style - the first time that the man has allowed himself to be properly "produced". The producer in question is Richard Duguay (Personality Crisis, the Hellhounds), a Canadian punk old-timer perhaps best known for his contributions to Guns N' Roses' The Spaghetti Incident?. Along with Duguay on guitar, the supporting band consists of Loren Molinare on guitar, Diane Nile on bass, and Tony Matteucci on drums. If those names look familiar, it's because Molinare and Matteucci are members of Detroit rock legends The Dogs. The first release from Mike Spent Black Belt is a digital single that just might leave you in a state of shock. Who ever thought that Mike Spent would record a ballad?! "I Am a Lion" is indeed a ballad - and quite a good one to boot! While clearly no crooner, Mike legitimately sings here. I like how the rasp and world-weariness of his voice work for him. The dude's got soul. I'm reminded of some of Mike Hudson's recent recordings - which makes sense given that Molinare and Matteucci played on those as well. Second song "Sun Goes Grey" is based on a riff that Molinare originally wrote over 30 years ago. An homage to the moodier side of '60s garage, it definitely brings to mind the darker creations of the Kinks, Animals, Yardbirds, etc.

The first thing I thought upon hearing these songs from Mike Spent Black Belt is that this is uncharted territory for a man known purely as a yeller. But Mike Spent actually singing sounds exactly like....Mike Spent actually singing! The voice coming through is so distinctively his, and it's really cool to hear his talents applied in a new way. Who ever said that being punk rock means you can't work with a quality producer and accomplished musicians? I can't imagine Spent Idols fans hearing this single and not thinking it's totally great.