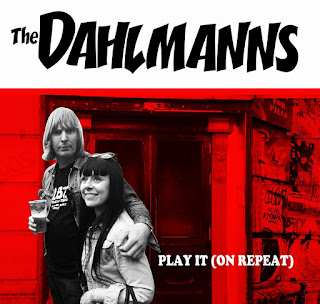 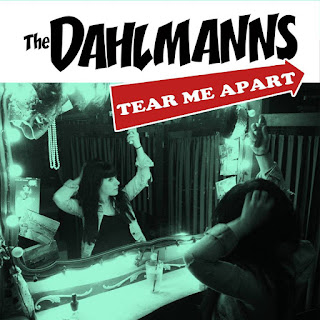 There are few things in life that make me happier than new music from The Dahlmanns. Their recordings are everything that the marriage of punk and pop could ever hope to be, and you might be less than human if the sound of Line's voice doesn't instantly make you feel good inside. I am delighted to report that there are two new singles from The Dahlmanns out for summer 2016, and of course they're the epitome of pop perfection. While The Dahlmanns did put out a fantastic album in 2012, they usually focus on singles. I actually like it that way - getting only small doses of the band allows me to savor every single track. Counting splits, these two new ones are Dahlmanns singles #8 and 9.

"Play It (On Repeat)" is out on Pop Detective Records - the band's seventh release on this particular label. It's available on CD EP as well as in the digital format via iTunes, CD Baby, etc. This song is what you might call classic Dahlmanns. The title says it all, doesn't it? I love the use of keyboards, and that hook is something else! This is the kind of tune that you wish they still played on the radio. It's paired with "Do You Want Crying" - a fantastic cover of the lead track off of Katrina and the Waves' second album. I'm a big fan of the original version, and I have to say I like The Dahlmanns' rendition just as much. One thing I've always appreciated about The Dahlmanns is the way they embrace cover songs. They always pick great material to cover and fully succeed at making it their own. In this version of  "Do You Want Crying", you can hear great respect for the original along with that special Dahlmanns touch. What a beautiful song!

Staying on the cover theme, Beluga Records has released The Dahlmanns' version of Suzi Quatro's 1977 hit "Tear Me Apart" as a vinyl single backed by the band's high-spirited rendition of the New York Dolls/Sylvain Sylvain classic "Teenage News". I love how The Dahlmanns put their stamp on "Tear Me Apart" - transforming this venerable Chapman/Chinn rocker into a sweet slice of country pop. "Teenage News" previously appeared as the B-side to limited editions of 2014's "He's A Drag" 7" on Ghost Highway Recordings. If you missed out last time, you get another shot at owning this stellar track on record. Beluga is releasing this 45 on green vinyl. Order a copy today!

I've literally been touting The Dahlmanns since day one of this blog. If you're already a fan, these new singles will not disappoint you. And if you're not yet a fan, do yourself a favor and go buy everything the band has ever released. All hail the royal couple of pop!