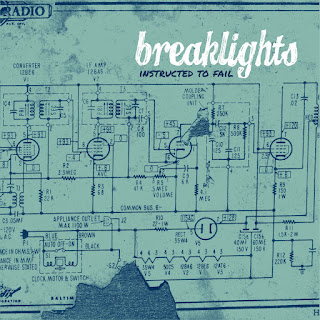 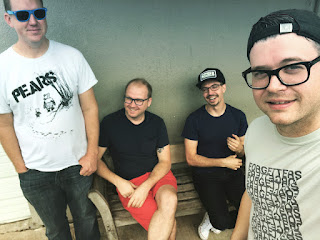 Back in the 2000s, I was a big fan of a wonderful pop-punk band out of Texas called Joe Jitsu. It has probably been close to ten years (maybe more!) since the last time I reviewed Joe Jitsu, and I'm pleased as punch that the band's lead singer Charlie and drummer Tron are still going strong in the punk world. After Joe Jitsu disbanded, Charlie and Tron formed Closet Drama - which leaned more in an indie power pop direction. And now they're in Breaklights - a band that shares three members with Closet Drama. Based out of Austin, Breaklights originally formed in 2012 but never really got going as a band until January of this year. They've just released a fine debut EP called Instructed To Fail which was recorded at Hanson's private studio in Tulsa with the great Stephen Egerton producing.

I think the obvious difference between Closet Drama and Breaklights is that the latter are a proper return to Charlie and Tron's punk roots. The main songwriting inspiration here is '90s punk rock. I'm reminded so much of what they used to call "post-hardcore" or "melodicore" or "emocore" back in the day. But in 2016, I think it's better just to say that Breaklights play pop-punk for adults. The songs are melody-driven for sure, but there's a real sophistication to the way that they're written. And this isn't a band that feels compelled to play at light speed. Of course you're getting a polished sound with Egerton producing - and those dense, crunching guitars really suit this band. With his warm and engaging vocal presence, Charlie is the rare singer that can exude sincerity without coming across as a total sap. As soon as the vocals came in, it was like I was hanging out with an old friend. These four songs have a nice mellowed-out vibe to them - along with strong hooks and plenty of guitar wallop. Somehow "Fakeout" and "Drag Me Down" take me straight back to 1995 yet still sound very much "right now". That says an awful lot about the staying power and continuing relevance of pop-punk. "Mainstay" and "Attached To You" almost cross over into power pop - finding a perfect middle ground Joe Jitsu and Closet Drama.

All in all, this is quite an impressive debut EP for a band that's just six months removed from its first practice. I've been listening to it in my car for a few weeks now, and I just don't tire of it! If you had told me in 2005 that Charlie and Tron would still be playing punk music in 2016, I would have hoped it was going to sound like this. I'm excited to hear more!