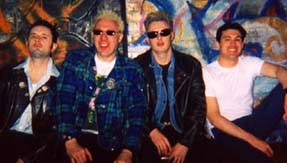 The mid-to-late '90s revival of '70s style punk will always hold a special place in my memory. And while I fondly recall so many great bands and recordings from that time period, at the core was a trio of bands that all happened to be on the same label - Pelado Records. Since this blog began, I've written a number of times about the Dimestore Haloes and Prostitutes. But before today I had not posted on the third arm of the triumvirate - the mighty Bladder Bladder Bladder.

Bladder Bladder Bladder were real English punks residing in Hollywood. That sounds a little bit like a movie premise, but it's the god's honest truth. They actually predated most of the '77 revivalist bands of the day - releasing their first single in 1991. The band was originally formed in England by Mick Bladder (vocals) and Alex Van Der Chaos (bass). After undergoing a number of lineup changes, the Bladder boys relocated to Los Angeles - "their cynical outlook sitting uneasily beside the swimming pools and palm trees." In L.A., they met up with London expat guitar slinger Sterling Paramour - and the classic American Bladder Bladder Bladder lineup was born. Given that English punk circa 1977-79 is my favorite music ever, it was no surprise that I immediately took to Bladder Bladder Bladder. Or more likely it was partially because of this band that I became such a geek for '77 U.K. punk. From the moment I heard Bladder's split 7" with the Dimestore Haloes, I was hooked. These guys were like nothing else that I was hearing in the punk world of 1996. They had swagger, style, and a sense of humor above all else. Their lyrics explored such topics as the glories of heavy drinking and the high strangeness of American life from a Brit's perspective. And their sound was steeped in the timeless traditions of The Clash, Sex Pistols, and Generation X. In 1997, the Pelado compilation Punk Rock That's Real gave us perhaps the two most defining songs of the band's career in the anthems "Crime Pays" and "Living A Lie". I eagerly awaited a full EP, which arrived a year later and did not disappoint. A brilliant and sadly overlooked full-length album - On The Job - followed in 2000. And just like that, the band was done - bowing out that same year with the "No Control"/"Slots Of Fun" 7" on 77 RPM Records.

It always disappointed me that the punk world at large never fully embraced Bladder Bladder Bladder. For sure, they had a decent local following in L.A. and played shows with many of the big So-Cal punk bands of the day. And their records garnered some solid reviews in the major punk rags. But it never seemed like American punks fully "got" this band. Perhaps they were "too English" or too over the top in their mission to swankify the western world. These guys, the self-proclaimed "international ambassadors of the Britannic punk rock", may not have garnered a following like the Stitches, U.S. Bombs, etc. But if you followed that whole scene, you probably have fond memories of the compilations listed below and might have owned a single or two from Bladder Bladder Bladder. And looking at the great number of English punk bands playing in the classic style today, Bladder Bladder Bladder (along with like-minded outfits such as Apocalypse Babys) deserve much credit for keeping the fire burning back in the '90s. Check out the clips below if you're not yet familiar with this great, much-missed band. And the original records, if you can find them, are well worth owning.

why have i never heard these before???

A friend of mine who's in his 50's said the same thing as you Josh, he couldn't understand why these guys weren't bigger and thought their album was the best thing I put out on Pelado Records. That album was over looked for sure!
Thanks for the write up!
Pat

Lies all lies.....and the reason the band were never bigger was too much time in the pub and not enough time in the rehearsal studio.

I remember them well, a finer bunch of reprobates you will not meet.

I know them well from London and LA. Good times indeed!