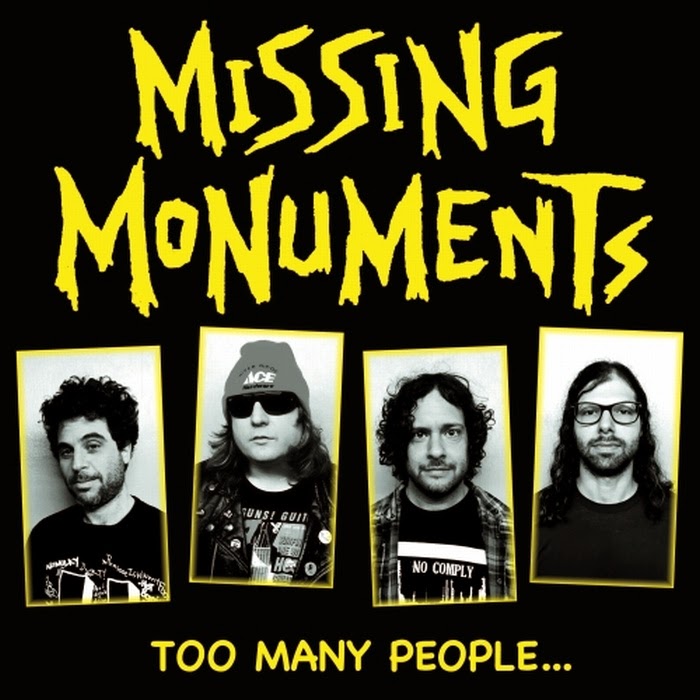 If you follow social media, you may have noticed that Missing Monuments have gone, uh, missing. No Facebook, no Twitter, no ReverbNation, no Soundcloud, no nothing. It's like Louie and the gang have disappeared from the face of the earth. Thankfully, they actually haven't! The New Orleans foursome is back with its fourth single - a co-release between the Spanish labels Kick Out the Jams, Blondes Must Die, and Ghost Highway Recordings. And it's no surprise that this thing rules hard!

Continuing in the direction of last year's superb LP on Dirtnap, the brand-new Too Many People... will surprise anyone who still perceives of Missing Monuments as a "power pop" band. It brings the heat big time! These cats take elements of garage, punk, pop, hard rock, and good old greasy rock n' roll and blend it all together until the concoction is uniquely their own. You never quite know what you're going to get with Missing Monuments, but you can always expect it to be freaking great. That's especially the case with this record - which shows that Missing Monuments have plenty of new tricks up their sleeves. "Too Many People Live In New York City" is probably the most "punk rock" the band has ever sounded. If you didn't know any better, you might think this song was unearthed from the vaults of the Southern California punk scene of the early '80s. It's got a dark, surfy vibe to it, and as always Louie and Julien tear it up on guitar! Lord, have mercy! I love the vitriol in the lyrics, and few people will disagree with the sentiment of the song. Just click play, and you will likely be singing along almost instantly. This is beach punk for people who prefer to surf the Gulf Coast. Pass the jambalaya!

While "Too Many People" shows us a side of Missing Monuments we've never heard before, "War Is In My Eyes" infuses some familiar moves with a heavy dose of Detroit rock grime. Louie's vocal stylings are unmistakable, and of course he comes through with a big hook when you've got to have one. But don't call this power pop, man. This is kick-ass rock n' roll! I'd say more, but it's time for you to stop reading and get to buying! This release is limited to 350 copies on black vinyl, and then it's GONE. So hop to it while the hopping is good! Americans can order this title from Goner Records.