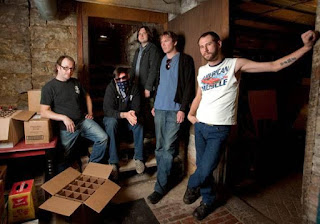 Seriously: what's not to love about a ten-song 7"?! That's some real bang for your buck in this tough economy! Columbus, Ohio's mighty Sick Thrills have given us No Fashion - the kind of record that makes me nostalgic for the heyday of the 7" EP. No doubt the instant gratification of downloading is pretty nice. But it will never be cooler than opening up a new 7" and playing it for the first time. And I love that DIY sleeve!

In a time in which so many bands attach themselves to some sort of sub-genre movement, the Sick Thrills are just straight-up PUNK ROCK. Of course when you're cramming ten songs onto a 7", you know you're not messing around. But the "hardcore" pigeonhole doesn't seem 100 percent right here. Instead I'm hearing more of a cross between Killed By Death punk and early '80s hardcore with a touch of Midwestern '77 danger to boot. The recording is great: very raw and basic in purely the best way, with guitars that cut like razors and a totally savage sound in general. Hot damn, this is what a punk rock record should sound like! It's lo-fi, but it freaking rips! The songs are quick bursts of fury, but they're surprisingly melodic and full of sing-along hooks that surely have the live crowds hoisting their beers in the air. Jon Slak on lead vocals sounds a little deranged and highly pissed - both tremendous attributes for music of this style. And while the pace of the record is dizzying, it's not like these guys are playing at all-out warp speed. The Sick Thrills just happen to be very efficient in their delivery, eliminating any unneeded excess and delivering the goods in succinct gut punches of glory. Having been blown away by songs like the blistering title track and the smash hit "Drugzzz", I'm kind of shocked that this is the first I've heard of this band. How have the Sick Thrills managed to evade my radar for so long? Check out the their YouTube channel to hear the awesomeness for yourself!