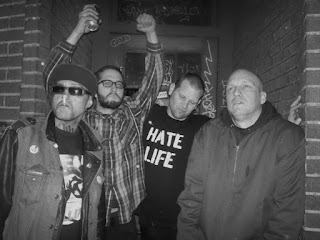 Seriously, man: do not fuck with Cleveland! You have been warned.

If you could invent the ideal punk rock band to represent Cleveland, Ohio, they'd probably sound a lot like The Plain Dealers. The band, featuring Brandon and Eric from the late, great TKO's, has a classic '77 punk rock n' roll sound smeared in urban Midwestern grit. They recently put a few new tracks up on their Bandcamp page, and that shit is red-hot. The formula is tried-and-true, but it's delivered with such fury and conviction that it makes me wanna run outside and start screaming to the world about the greatness of The Plain Dealers. Fuck yes, man! Punk rock! Ain't it the best?!

"Take Out The Trash" and "Untrue" are raging blasts of pissed-off old school punk with snotty vocals and rockin' guitar leads. Both songs grab you with a simple, shout-along chorus and a heavy dose of take-no-shit attitude. "Die With Me" is more on the epic side of things a la some of the slower Dead Boys songs. I'm also hearing a little Dictators, which can never be a bad thing. And "Wild Child" sounds like something from the heyday of the Stitches or U.S. Bombs. Great stuff! I guess some people might even call these guys "street punk", which probably isn't too far off if you're referring to the streets of Cleveland.

It seems to me that there just aren't enough bands like The Plain Dealers these days. They aren't pop/punk, they aren't "garage". They don't cater to any hip trends. They just play good old punk rock n' roll that kicks you hard in the ass. And while their musical influences are no great mystery, they have their own identity entirely. There's just something uniquely "Cleveland" about this band. And trust me: that's meant as a high compliment.

I heard of those guys.. can't wait till their new record comes out.

I went to see them at some shitty bar one night, there were tons of fat chicks at the show, long story short, I now have herpes. 8/10 would go to show again.

So, you're the guy who went home with my mom.

If you call a damp cardboard box in a musty alleyway your home, then sure that was me.

Last time i saw them i was pretty fucked up. i remember blue paint and finding a hotwheels car in my ass the next day. i think the music was good? i'd see them again.

THE PLAIN DEALERS new album "Get What You Get..." is now available at: www.plaindealers.us