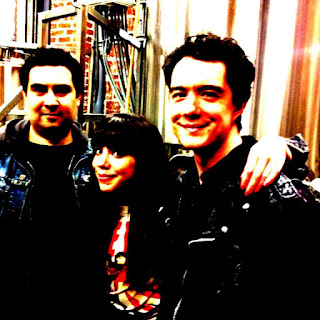 Alright! Let's cap off the month in style! As you may have guessed from the name, Piss Test is not an emo band. Instead think catchy and aggressive Killed By Death style fury with a heavy injection of Texan punk n' roll scuzz - except they're from Portland! You may know Zach, Samantha, and Rodrigo from such groups as Red Dons, Therapists, Cuntifiers, Scott Baio Army, Soda Pop Kids, Call Sign Cobra, Zach the Cuntry Wonder, and Shadowhouse. But I get the feeling that Piss Test is gonna be bigger than any of those bands. The Portland trio has a brand-new 7" out on the venerable Jonnycat Records, and the thing is flat-out hot. I'm talking punk-as-fuck type stuff that rocks! I love the raw sound and memorably vitriolic lyrics. You can tell how much fun these three are having, and that energy is totally contagious! This is what we've been missing in today's scene - bands who bring a genuinely original take to an "old school" punk style. You hear a Piss Test song, and you know it's a Piss Test song! "Frigid Punks" is quite the scathing statement, and it's an instant anthem to boot! I dare you to resist singing along. And if you crave a good laugh in a sleazy and brilliantly tasteless sort of way, it's hard to beat songs like "Necrophilia (It's Halal)" and "IPA". These cats have got the attitude and the killer tunes to boot. If you're highly distressed that punk music has become way too safe and clean-cut for your degenerate tastes, Piss Test will warm your heart with its sordid tales of chemical abuse and bad life choices. Best new band of the year so far!